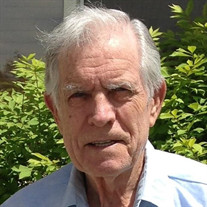 Melvin Lavon Marshall 1919 – 2017 Melvin Lavon Marshall passed away on October 26, 2017 at the age of 97. He was born on December 27, 1919 in Rexburg, Idaho to Charles F. Marshall and Helen C. Fikstad Marshall. He was the youngest of three children. Melvin was born on his father’s birthday and will be laid to rest on his mother’s birthday, October 31. Mel grew up in Burton, Idaho on a farm where he enjoyed the companionship of his brother Lee and sister Hazel. He worked hard on the family farm where he rode horses, fed chickens, and took care of pigs and cattle. In grade school he nearly drown on an ice pond after staying out after recess. Later, he attended Idaho State where he received his Associates Degree. Mel was working for Greyhound Bus as a ticket agent at the time he joined the U.S. Air Force just days before WWII began. He officially retired as a Lt. Colonel, in 1971. He moved to Glendale, California after active duty where he met Lorna Kathleen Pickering. They married, had a daughter, Jill, and were then sealed in the Los Angeles temple as a family. After a divorce, Mel spent the next 20 plus years working in Hollywood as an actor, director, producer, and writer. Among his many credits, he was screen supervisor on the movie The Big Country starring Charlton Heston, Gregory Peck, Chuck Connors, Carroll Baker, and Jean Simmons. His movie and television credentials are nearly endless. At 66, he met and married Beverly Polcyn and became a father once again at 70 when they had a son, Cody. The two were sealed in the Los Angeles temple. They made their home in Riverside, California and Rexburg, Idaho. Mel faithfully served LDS church throughout his life in many callings including a stake mission. Mel is survived by his daughter, Jill, his son, Cody, Cody’s mother Beverly, nephews, grandchildren, and two great-grandchildren, Amelia Young and Zillion Marshall. We will miss his kindness, his generosity, and his quiet, sweet demeanor. He truly loved all who were around him. Mel is preceded in death by his father, mother, brother Lee Marshall, and sister Hazel Struhs. Mel will be dearly missed by family and friends. Funeral services will be held 11:00 am, Tuesday, October 31, 2017 at the LDS meetinghouse across the street from Sunridge Assisted Living in West Jordan, Utah, 7037 South, 4800 West where a viewing will be held prior to services starting at 10:00 am. The family wishes to express their deep appreciation for the team at Sunridge Assisted Living, his nurse, Veronica, and Premier Funeral.

The family of Melvin Lavon Marshall created this Life Tributes page to make it easy to share your memories.