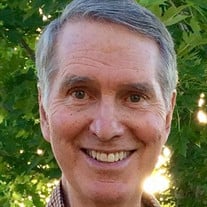 Melvyn Leeman Bennett 1941 - 2017 Melvyn Leeman Bennett passed away peacefully with family at his bedside on April 21, 2017 from the effects of dementia precipitated by a previous fall. He was born, January 26, 1941 in Cedar City, and raised in Orem, by his parents Leeman Bell and Edith Christensen Bennett. He knew it to be a blessing and privilege to be raised by parents who made and kept covenants with the Lord and taught him the gospel. He loved the gospel and its teachings and remained a faithful, active member of the LDS Church his entire life. He diligently taught his children these same principles and faithfully served whenever and wherever he was called. In his youth Mel was taught by dedicated teachers in Orem at Spencer Elementary, Lincoln Junior High and Orem High school where his father was the principal. After high school Mel served his country in the army reserve. Mel was then called to serve a mission for the Church of Jesus Christ of Latter-day Saints in Austria where he learned to love the German language, the Austrian people and their beautiful country. Following his mission he attended BYU and graduated with a degree in German and a Masters degree in public administration. While studying at BYU, he met his lovely bride, Marlene Carpenter. They were married September 4, 1965 in the Los Angeles LDS temple. In his writings Mel said, “Marlene is the best thing to have ever happened to me.” Mel and Marlene were blessed with amazing children, grand children and great-grandchildren that they love and adore. After graduation Mel and Marlene moved to Houston where he worked for Humble Oil. They later moved to Ogden where he was the administrator for the BYU Continuing Education Program. Mel and his family eventually moved to Bountiful and he started a career as a loyal employee of IHC and continued his career at Primary Children’s Hospital as an assistant administrator for many years. His fun meter was always full. Mel loved taking his family camping, on road trips, and vacations to California. Mel loved snow skiing and boating on the beautiful Utah lakes, especially Lake Powell. Lake Powell holds a dear place in his heart and we all know how much joy he received from being with his family and slalom skiing on that beautiful lake. In later years, Mel and Marlene served a proselyting mission for the LDS Church in the Cape Coast, Ghana Africa mission. They faithfully opened and served their entire mission in the city of Sunyani where he once again fell in love with a beautiful people and country. Following his mission Mel served as an ordinance worker in the Bountiful LDS Temple and also served with his wife as service missionaries in the South Davis Care Center. Throughout his life Mel found joy in Christlike service to his family and friends. Mel is survived by Marlene, his loving wife of 51 years and their eight children; Markelle (Jeff) Christensen, Arizona, Melinda (Steve) Jensen, Kaysville, Melanie (Danny) Carr, California, Markham (Abby) Bennett, California, Myla (Brandon) Warren, Kaysville, Marianne (Lance) Franks, Kaysville, Michael (Brittney) Bennett, Idaho, Molly (Jamie) Titera, Bountiful, as well as 43 beautiful grand children and 3 great-grand children. Mel was preceded in death by his parents and his sister Edith Raquel Bennett Holman. The family would like to express their great appreciation to Heritage Place care center and to the nurses and CNA’s for the kind and loving care provided to Mel during the final five months of his life in the memory care unit. Funeral services will be held 11:00 a.m., Saturday April 29, 2017 at the LDS church located at 720 East 550 North, Bountiful, Utah where viewings will be held 6 to 8 p.m. Friday, April 28, 2017 and Saturday April 29, 2017 from 9:45 to 10:45 a.m. Interment will be at the Bountiful City Cemetery.

Melvyn Leeman Bennett 1941 - 2017 Melvyn Leeman Bennett passed away peacefully with family at his bedside on April 21, 2017 from the effects of dementia precipitated by a previous fall. He was born, January 26, 1941 in Cedar City, and raised... View Obituary & Service Information

The family of Melvyn Leeman Bennett created this Life Tributes page to make it easy to share your memories.