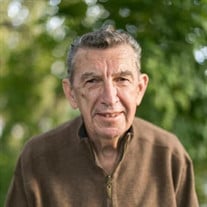 HATHAWAY, Merlin Scott “Scott” Our hero, father, grandfather and great grandfather Scott Hathaway passed peacefully on Thursday April 2, after a challenging battle with Parkinson’s. He was being lovingly cared for by his two favorite daughters and was able to hear from all his children, grandchildren and great grandchildren in the past few days. October 7, 1939 – April 2, 2020 (Merlin) Scott Hathaway was born October 7, 1939 to Charlene Lillian (Cook) and Merlin Daniel Hathaway in Berkley, California. His younger sister Christina Lee Hathaway (Coite) joined their family five years later. Scott grew up in the Bay Area of California. He loved playing baseball and riding bikes with his friends up into the hills. He enjoyed swimming, hiking, boating, basketball and spending time in the outdoors throughout his life. He graduated from San Leandro High School. He attended and graduated from Brigham Young University where he met his sweetheart, Gayle Alene (Jensen) and they married for time and eternity in the Salt Lake City Temple of The Church of Jesus Christ of Latter-day Saints on August 4, 1961. Scott spent the majority of his career as a sales representative for several companies, including Kennedy Valve and ITT. In 1984 he started his own successful company, P & H Representatives and continued to sell water treatment systems around the country to cities and private industry until his retirement in 2010. Scott and Gayle loved to travel together to visit their children and grandchildren, go on cruises, and see the world. They also enjoyed swing, ballroom and square dancing together. Scott loved his family and is dearly loved by his children and grandchildren for his delightful sense of humor, his wisdom, and his calming influence in their lives. Many of Scott’s children and grandchildren shared memories of being entertained by Scott’s wonderful storytelling gift and his funny jokes. Scott had a strong testimony of the gospel and his Savior Jesus Christ. He served in many callings in the Church including Ward Clerk, High Priest Advisor, Primary Leader, and on the Activities Committee with his wife Gayle. He did not limit his service to within the church. Many friends and neighbors often turned to Scott for help because they knew he would be there for them. He was a friend to everyone. Dad was a great teacher to his children and grandchildren. He taught us how important integrity and honesty are, how to work hard and how an eternal marriage should have love and respect. His example of love for his wife and family is far reaching and will be passed on to his posterity. Scott said last year, “As I approach my 80th birthday, I recognize the importance of relationships with family, friends, and other people. I feel it is also important to have a close relationship with Heavenly Father and His Son Jesus Christ. I am very grateful for the fact the I have had the opportunity to take advantage of repentance and forgiveness. I am very appreciative for the love and support of my family and friends throughout my life.” He will be missed by Gayle (dec), Jeffrey Hathaway (son) (Monica Morgan), Stephanie (dtr) and Jeff Bunker, Valerie (dtr) and Ken Baughman, and 6 grandchildren, Chelsey Bunker (Jordan King), Joshua Bunker (Heather Kitchen) and Zachary Bunker (Holly Eisenhut), Jenna Baughman (Jon Salvini), Kody Baughman, and Hunter Hathaway, and by his sister Christy Hathaway (Paul Coite). Nine Great grandchildren: Anna and Brecken King, Landon, Drew, Hailey, Alexia, Kaden, and Kenzie Bunker, and Jordynn Salvini. There will be a celebration of life in the summertime in Utah and one in California to honor Scott. In lieu of flowers, donations can be made to The Church of Jesus Christ of Latter-day Saints Humanitarian Fund or MichaelJFox.org to aid in Parkinson’s research.

HATHAWAY, Merlin Scott &#8220;Scott&#8221; Our hero, father, grandfather and great grandfather Scott Hathaway passed peacefully on Thursday April 2, after a challenging battle with Parkinson&#8217;s. He was being lovingly cared for by his... View Obituary & Service Information

The family of Merlin Scott Hathaway created this Life Tributes page to make it easy to share your memories.