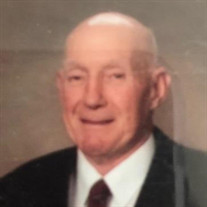 Merrill Andrew Jensen, 79, passed away in his home in Sandy, Utah, on August 7, 2020. Born into a family of all boys on June 12, 1941 in Manti, Utah, he was the fifth child of Richard Andrew Jensen and Mildred Annie Lowry. He grew up working with his brothers on the Jensen Palisade Farm in Sterling, Utah, instilling in him a work ethic he carried with him his whole life. Merrill was a member of the Church of Jesus Christ of Latter-day Saints. As a young man, he served in the Central British Mission from 1961-1963. He was proud of his long heritage in the Manti area and performed in the Manti Pageant several seasons. He had another opportunity for a Service Mission from 2005-2007, this time serving in the Cambodian Branch of Salt Lake City with his wife. In 1965, he married Sally Jane Ackerman in the Salt Lake Temple. Merrill and Sally had three sons and raised their boys in Sterling on Jensen Lane. Merrill raised his boys working alongside him and their cousins on the family dairy farm. Sally suffered from mental illness, and when Merrill could no longer safely care for her increased needs, they divorced in 1998. After his boys were grown, the family farm was sold and Merrill spent the rest of his years managing rental properties in Salt Lake County with his new wife, Gloria, whom he married in 2004. Merrill enjoyed square dancing with Gloria, taking trips to see new areas, and having their kids come over for an evening of dinner and games. Gloria cared for Merrill as he declined over the last three years following a traumatic brain injury. Merrill is survived by his wife, Gloria George Jensen; his sons, Jerry Jensen (Manti, Utah), Ron & Jennifer Jensen (Spanish Fork, Utah), and Brian Jensen (Price, Utah); his step-children, Barbie & Walt Elliot (Fruit Heights, Utah), Tracy & Brent Bytendorp (Draper, Utah), DeWayne & Maddy Tygesen (West Valley City, Utah), Ryan & Marion Tygesen (Magna, Utah); 35 grandchildren; 5 great-grandchildren; brothers, Raymond & Pamela Jensen (Grantsville, Utah), and Jack & Susan Jensen (Salem, Utah). He was preceded in death by his parents, three brothers, and two grandchildren. A private family viewing will be held at 9:00am in the Sterling Chapel on Saturday, August 15, 2020, followed by a graveside service and interment in the Manti City Cemetery. Condolences can be sent to the family at www.premierfuneral.com

Merrill Andrew Jensen, 79, passed away in his home in Sandy, Utah, on August 7, 2020. Born into a family of all boys on June 12, 1941 in Manti, Utah, he was the fifth child of Richard Andrew Jensen and Mildred Annie Lowry. He grew up working... View Obituary & Service Information

The family of Merrill Andrew Jensen created this Life Tributes page to make it easy to share your memories.

Merrill Andrew Jensen, 79, passed away in his home in Sandy,...