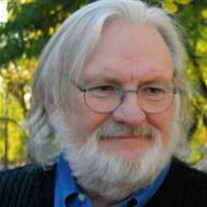 Michael Dean Hansen passed away peacefully and surrounded by loved ones on December 31, 2019. He was born June 19, 1944, to Helen Barrett Hansen and Moses John Hansen in Ogden, Utah. Those who knew him knew he was a witty, kind, smart, loving, comedic man who loved his family, friends, and pets. He was a man of many talents and hobbies from delicate stained glass to being the Superintendent on the Governors Plaza across from the Governors mansion in SLC to doing the excavation estimating on City Creek in SLC. He was a man of all trades and took professional pride in all he did. He graduated with a Bachelor’s Degree from Weber State and later from the University of Utah with his Masters in Psychology and a minor in Chemistry. He served as the Director of Davis County Mental Health for a number of years. After his time with Davis County, Michael began working in the construction field and obtained his General Contractors License, of which he was proud. He started out building homes and later progressed to commercial construction, working for multiple companies in the valley, finally starting his own company where he worked in commercial estimating. Some of his hobbies included camping and hunting; he later traded in the gun for a camera when it came to shooting animals. He also loved boating. He started with a small aluminum fishing boat and ended with a 32- foot Uniflite, he named “Zeus.” During this time, he was part of the U.S. Coast Guard Auxiliary and would go out in bad weather to rescue boaters. He also taught boating safety classes. Michael was an entrepreneur throughout his life. Some of his small businesses were: MDH Marine, Contractors West, Zeus Lures, OutdoorApparel, and Nature in Glass. Michael loved teaching anyone interested, how to make stained glass pieces. Michael is survived by his wife of 44 years, Sherry Edgar Hansen of Layton, Utah. His former wife Drew Menkhaus (Daniel) of Island Park, Idaho. His children include: Janice Masters (Teena), Michael Bret Hansen (Denise), Steffanie Morton (Jim), Troy Hunt (Michelle), Jason Hansen (Mack Esteban), Chalene Curry (Caleb), Lael Hansen, Kristin Colby (Mark), and Nathan Hansen (Adriana). He is also survived by his brothers Marvin Hansen (Karen) of Mendon, Utah and Melvin Hansen (Janice) of So Ogden, Utah; his sister-in-law Arleen Maylin (Charles) of Clinton, Utah and his brother-in-law Les Edgar (Claudia) of Davidsonville, Maryland, as well as 23 grandchildren, 16 great-grandchildren and many nieces and nephews and their children. There will be no funeral service held, per Mike’s request, as the family will be holding a private gathering to celebrate Michael’s life – if you would like to attend please contact the family. That event will be 1/11/2020, Sat at 2:00 PM. Mike was a member of the LDS church. In lieu of flowers, the family asks that you donate to The Humane Society. Website is UtahHumane.org, mailing address is PO Box 573659 Murray, Utah 84157, phone number 801.261.2919x288. The family would like to thank the staffs of Fairfield Rehabilitation Center in Layton, Mt. Ogden Health and Rehabilitation Center in Ogden, Atlas Home-Care and Hospice in Murray, and Sue Basta at the University of Utah who helped him so much for 25 plus years to function with limited pain.

Michael Dean Hansen passed away peacefully and surrounded by loved ones on December 31, 2019. He was born June 19, 1944, to Helen Barrett Hansen and Moses John Hansen in Ogden, Utah. Those who knew him knew he was a witty, kind, smart, loving,... View Obituary & Service Information

The family of Michael Dean Hansen created this Life Tributes page to make it easy to share your memories.

Michael Dean Hansen passed away peacefully and surrounded by...