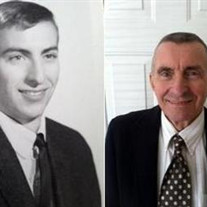 Michael Melvin Hunter, our devoted father, brother, and grandfather passed peacefully from this mortal life on Monday, March 16, 2015 while with family on the way to the opera. He was born on January 23, 1941 in Twin Falls, Idaho to Miles and Bernice Hunter. Michael was raised most of his younger life in Casper, Wyoming. He was a cowboy at heart and spent summers working at his grandfather’s ranch in Idaho. Michael was a scholar, musician, and disciple of Jesus the Christ. He loved sports, sports announcing and officiating. Michael was a graduate of Natrona County High School, in Casper, Wyoming, Colombia University in New York City, and University of Utah Law School. He served as a missionary for the LDS church in the French East Mission, then returning home and marrying Rebecca Schulze in 1967. Throughout the 70’s and 80’s he brought his family to the Washington D.C. area, working in various positions in the government and private sector. This included the Justice Department, Assistant U.S. Attorney, Senate Legislative staffs (including Senator Orrin Hatch in 1977) and Director of Corporate Affairs for ITT. He served as a LDS Bishop and on the High Council in Washington D.C. Michael moved his family back to Utah in the early 90‘s working in various consultant positions and carrying on his passion for family, sports officiating and singing. He sang with the Utah Symphony Chorus, the Sterling Singers and others. He is survived by children Michael B. (Jacinda), Marcus (Karen) and April; brothers K Lamont (Brenda) and Randy (Renee); grandchildren Kaden, Hannah, Kyler, Kate, Jayne, Carson, Olivia, Bella, and Jessie. Services will be held on Saturday, March 21, 2015 at 11:00 AM, at the Little Cottonwood 9th Ward on 1160 E Vine St, Murray, UT 84121. A viewing will be held previous to the service at 9:45 AM and the previous evening of the 20th, 6-8pm at the same location.

Michael Melvin Hunter, our devoted father, brother, and grandfather passed peacefully from this mortal life on Monday, March 16, 2015 while with family on the way to the opera. He was born on January 23, 1941 in Twin Falls, Idaho to Miles... View Obituary & Service Information

The family of Michael Melvin Hunter created this Life Tributes page to make it easy to share your memories.