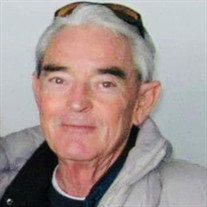 Michael Lynn Jones was born in Ogden, Utah on March 8th in 1949. His Father Boyd Jones (92 years young) still lives in Ogden, Utah and his Mother Beverly Hooper has since passed a few years back in Roy, Utah. Michael is the eldest of 6 siblings. He has three sisters Mary Booth, Diane Stack, Megan Jones, Sister In-Law Kay and long term girlfriend of Vern, Thanh. He has 2 brothers Vern Jones, Jerry Jones and Brother In-Law's Bob and Alex. After Michael graduated from Rawlings High School and started attending Weber State College he met the love of his life Christine Farnsworth Jones while both working at the Young Sign Co in Ogden, Utah in 1968. They fell in love and decided to get married on November 22, 1969 in Denver, Co. While there, they were blessed with a wonderful son, Donavan Paul Jones. Then they briefly moved to Utah and had a beautiful daughter, Cindy Jones-Wilson. After a few years they packed up and left Utah and moved for many years to sunny California managing and owned several Kirby stores. Once the kids graduated they moved to Phoenix, AZ in 1990. It was there they met some fabulous people. Christine was the neighborhood daycare provider and watched some of the most wonderful children (Jordan Tucker, Trevor Tucker, Amanda McNair HiItes, Jessica Flanagan and Zach Perez). To this day they consider the parents close friends and the kids are their “AZ Grandkids”. While in AZ they met their neighbor Jennifer and had an instant bond. So, when Donavan met her, he knew she was the “one” and after many years of being together they decided to get married in Salt Lake City, Utah in 2016. The whole family was so excited of this joyous event along with her son Zach Perez and his long-term girlfriend Natalie. While Michael, Christine and Donavan were living in AZ, Cindy decided to stay in CA and go to College, while there she met David Wilson through her friend Sydney Wilson (David’s Sister) and after a few years in 1994 they were blessed with the most precious son Dorion Michael Wilson and in 1996 married David in Big Basin, CA in the Redwoods with themed renaissance wedding. Chris and Mike were “King and Queen”, of course! I’m not sure Mike liked wearing the thigh-highs but was a great topic of conversion that day as he was constantly pulling them up! Over the years there were many fun vacations with the family to Disneyland, California bay area and MANY trips to Arizona so they kids can play in Mike and Christine’s pool for the summer breaks playing with the families they bonded with over the years. One of the most joyous days was on April 21, 2021 when Julian David Wilson was born, son of Dorion, Mother of Arlene, brother of Carols and great-great grandson of Michael and Christine. We would never forget the visit when Mike was able to finally meet him for the first time. The happiness and joy spread through the room and we saw a light in Mike that we haven’t seen in a LONG time! Through the years Michael landed a wonderful job at Barbeques Galore in AZ for 20+ years and met some great people he considered family and kept in touch with. While working there he had cooking segments on some local shows and even BBQed on site. Mike loved to cook and he was so good at it but boy could he bake! He loved to bake pies, cakes, cookies and we all benefited from that… maybe a little too much! When Mike wasn’t cooking or baking he was usually reading a good book. He was a speed reader so could really go through them quick! Mike was truly a loved and respected man that was devoted to his family and friends. He will forever be loved and missed by all!

Michael Lynn Jones was born in Ogden, Utah on March 8th in 1949. His Father Boyd Jones (92 years young) still lives in Ogden, Utah and his Mother Beverly Hooper has since passed a few years back in Roy, Utah. Michael is the eldest of 6 siblings.... View Obituary & Service Information

The family of Michael Lynn Jones created this Life Tributes page to make it easy to share your memories.