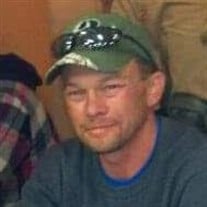 Michael “Scott” Pinjuv Michael “Scott” Pinjuv, 47, of Salt Lake City, Utah passed away June 4th, 2017 at home after a long struggle with diabetes. Scott was born October 20th, 1969 to Marcey (Paice) Harkenrider in Las Vegas, Nevada. He graduated from Cottonwood High School in 1988. After being together for nine years, Scott married the love of his life and best friend, Diane Jensen, on June 23, 2000 in Salt Lake City, Utah. They were sweethearts for twenty-six years. Scott was employed as a storage facility manager at Millcreek Self Storage. Scott loved camping, fishing, firearms, and his family. He would drop anything he was doing to help a family member or friend in need. He was deeply devoted to his mother, Uncle Craig, and Aunt Gail. He volunteered and devoted much of his spare time to the South Salt Lake Metro Fire Rehab and was a core member of the C.E.R.T. team. He taught concealed firearms training as a certified concealed weapons instructor for the State of Utah. He was willing to teach and help anyone in need. Scott was quick witted and able to take a joke as well as give one. His friends were his brothers and sisters. He was always the first one to help someone in need. Anyone who was having a difficult time knew they could count on Scott. He lived by the motto “adapt and overcome.” Scott influenced the lives of those he helped and taught. He will be missed dearly by all who knew him. Scott was preceded in death by his maternal grandparents, Clifford and Janet (Brown) Paice and step-father Tom Harkenrider. He is survived by his wife, Diane (Jensen) Pinjuv, son, Christopher (Lindsay) Jensen, daughter Siera Jensen, three lovely grandchildren, Rylee (4), Isabella (2), Xander (10 months) Jensen, mother Marcey (Paice) Harkenrider and uncle Craig (Gail) Paice. A viewing will be held on June 9th, 2017 at Winder 11th Ward, 951 East 3825 South, Salt Lake City, Utah from at 9:30 - 10:45 am. Funeral services will follow from 11:00 am. -12:00 pm. Burial will be at Lake Hills Cemetery, 10055 South State St. Sandy, Utah. We will always carry your memory in our hearts. Save a spot at the table. We Love you so much!

The family of Michael Scott Pinjuv created this Life Tributes page to make it easy to share your memories.