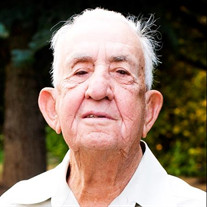 Miguel Saavedra Varela peacefully passed away at his home in Pleasant Grove on September 4th, 2018. Not only was he a blessing and joy to his family but he also quickly became a surrogate grandfather to all the children he came in contact with. He was known as Tiki or abuelo not only by his beloved great-grandchildren but also by many of the children and friends in his life that he dearly loved. Born on April 7, 1917 in Antilla, Cuba, his parents—Ismael Saavedra and Aurora Varela-- were actually both natives of Spain who had emigrated to Cuba with high hopes of a prosperous future. Their circumstances didn’t improve faster than their expanding household of 8 children with Miguel situated as number 4. Consequently, he and his siblings were responsible for milking cows, tending the vegetable garden, delivering water to the neighborhood, and accepting just about any job available which could contribute to the family finances. Miguel was known as one of the hardest working members of his family. He really never quit working hard throughout his long life. While still a teen, he and his brothers launched a water delivery service using an old truck they purchased locally. Despite being limited to school attendance only through the second grade, he learned quickly and educated himself in the important aspects of practical business sense. He gradually expanded the family business to the point that they were able to purchase a small grocery store. While becoming an enterprising entrepreneur, Miguel met the love of his life: Elpidia Garcia. They were married March 5, 1949 at a time when confidence in the future was giving hope to their dreams. They were soon blessed with two beautiful daughters, Josefa Aurora and Maria del Pilar. With the money earned in his store, he was able to purchase several rental homes and then later bought a beautiful ranch in Barajagua, Cuba. With accessible water and productive fields, he bred cattle. That ranch was his pride and joy; the image of it was still vivid in his mind up through the last month of his life. Sadly, though, the Cuban Revolution of 1959 devastated his dream. Shortly after Castro took power, the government confiscated his store, then his beloved ranch, and finally his own home. The dire situation of the country’s upheavals led he and his wife with their youngest daughter Pilar to leave Cuba as refugees which meant that the condition of emigrating visa was a signed statement turning over all of his hard-earned properties and possessions over to the government. The oldest daughter, Aurora,her husband, and his first grandson, Jorge, remained behind. After staying 2 years in Spain as political refugees, Miguel and his family were allowed to enter the United States in 1972 by settling in Puerto Rico. He began to rebuild his life from scratch where he gradually built up equity to own several small businesses. The work ethic of he and his wife allowed them to begin sharing a little of the American dream with their daughter and later, his granddaughter Pilar. It would not be until 7 years later in 1979 that his diligent efforts to bring Aurora, her husband, and their children Jorge and Arleti finally proved successful. He was able to retire in the year 2000. Shortly afterwards, he and his wife, Elpidia, moved to Miami were he bought his first house in the United States in a neighborhood near by their daughter Aurora. Just ten years later, Elpida suddenly passed away in June 6th, 2010 leaving Miguel broken hearted. It then seemed prudent that he move to Utah where his daughter, Pilar, could offer the care he needed. It did not take time for him to adopt his new state of residence even though Spanish remained his dominant language. In 2016 his oldest daughter, Aurora, passed away after losing a battle with cancer. Despite his advanced age he was by her side offering comfort and love during her final days. This second family death added to his grief; however he found great joy sharing discussions of memories while living with his daughter, Pilar, and frequently being visited by his grandchildren and great grandchildren. His daughter Pilar lovingly and tirelessly cared for him during these last 8 years of his life and was by his side at the time of his passing. Miguel's greatest joys were his great-grandchildren: Cristina, Miguel, Rafael, Natalie, Andre, and Lucas. He loved watching them grow, giving them love, affection, support, and was a great role model for them. His last words to them: “Get an education, and never quit”. He loved them with all his heart with a love that was pure, untainted, and unconditional. He was their greatest fan and he was always willing to do anything for them. Our greatest cheerleader and fan has returned home. Our amazing father, and grandfather passed away at 101 years old. He was an important anchor in our lives and we love him dearly. He was a man of integrity who gave love and kindness freely to those around him. He was the most adorable old man in the world. He has left a huge hole in our hearts and we are already missing him more than words can say. “We love you, Abuelo, and look forward to the day when we will see you again where we can be together for the eternities”

Miguel Saavedra Varela peacefully passed away at his home in Pleasant Grove on September 4th, 2018. Not only was he a blessing and joy to his family but he also quickly became a surrogate grandfather to all the children he came in contact... View Obituary & Service Information

The family of Miguel Saavedra-Varela created this Life Tributes page to make it easy to share your memories.

Miguel Saavedra Varela peacefully passed away at his home in...