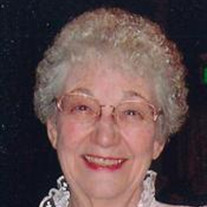 Mildred Perkins Wallace Eck Ward Chapman Our loving mother, grandmother, wife, aunt and friend, “Midge”, 88, was welcomed into the arms of her loving Father in Heaven on Monday, May 6, 2013. Midge was born on May 15, 1924 in Preston, Idaho, to Ellis LaVerne Wallace and Marie Ann Perkins. An only child, Midge was the “princess” to these sweet parents. The family later moved to Utah where Midge graduated from Logan High School. After high school, she met her sweetheart, Lloyd Joseph Eck who was actively serving in the U.S. Army as a paratrooper. On March 22, 1944, when “Joe” was home on furlough, they eloped (with their parent’s permission) and were married. They were later sealed in the Logan L.D.S. Temple. Joe and Midge lived many places while Joe was serving in the Army, but they finally settled in Stockton, California, where they made their home. Midge’s parents soon joined them in California so that that they could be near their “baby girl” and any grandchildren to come. Midge and Joe were blessed with a baby boy, Lloyd Joseph Eck Jr. (Joey) in February of 1945 and Midge was 7+ months pregnant with a baby girl when tragedy hit their family. In February of 1948, the family was returning from a picnic when the car they were driving was struck by a drunk driver. The accident claimed the lives of Midge’s parents, her three year old Joey and injuries to Midge caused her unborn child to be still born. Joe and Midge sustained terrible injuries and were hospitalized, but fought through their broken bones and broken hearts to continue on in this life. Midge was told that as a result of the injuries she sustained in the crash, she would never conceive or give birth to another child. Against all odds, Midge and Joe were blessed with three more children—Joette Marie, Lou Jean and Melanie Jane. Life was once again blissful until 1980 when Joe passed away unexpectedly. Midge spent five years alone before catching the eye of Leon Ward. She and Leon married and for the next 16 years enjoyed each others’ company. Leon passed and once again Midge found herself as a widow. She decided to move to Utah to be closer to her daughter, Melanie. She moved into a senior living center, Legacy Retirement, and was there just over a year when she met a gentleman, Wendell Chapman, who won her heart and they married in October 2006. They spent every moment together loving the retired life until just a few months ago when her health declined to the point that she needed 24 hour care. She moved into a personal residence with the Fonua family, who became just like family to all of us. Mom loved her caregivers, Pita, Latu and Isa very much and was so comfortable in their home. It was here—months after moving in—that she slipped away painlessly on Monday morning. Midge was a member of the Church of Jesus Christ of Latter Day Saints and served in many capacities as a teacher, leader, temple worker and missionary in West Virginia (with Leon). She loves the Lord and His gospel and always wanted to make sure that we were “doing what we were supposed to be doing” so that we could be an eternal family. Midge was a proud member of the Daughters of Utah Pioneers and loved this part of her heritage. Midge worked in several occupations—the longest tenures being the personnel director at Weinstock’s department store and working as the secretary to Dr. David Bernard who was the director of Medical Education at St. Joseph’s hospital in Stockton, California. Midge is survived by her husband, Wendell Chapman, daughters Joette Marie Rex (Jeff) of Escalante, Utah, Lou Jean Smith (Don) of Sonora, California, and Melanie Jane Steffensen (Chris) of Sandy, Utah. She has 15 grandchildren and 28 great-grandchildren. Funeral services will be held on Thursday, May 9, 2013 at 1:00 P.M. at the Sego Lily Church located at 10310 Ashley Park Drive (2150 East) in Sandy, Utah. There will be a viewing one hour prior to the services in the Relief Society room on the north end of the building. An additional viewing will be held Wednesday evening, May 8, 2013 at the same building in the Relief Society room located on the north end of the building from 7:00 to 8:00 p.m. There will also be a graveside service on Saturday, May 11, 2013 at 9:30 A.M. at the Park View Cemetery in French Camp, California. Midge will be laid to rest here next to Joe. There will be a “celebration of life” get-together at the Brookside LDS chapel on Brookside road in Stockton from 11:00 A.M. to 1:00 P.M. on this same day. Please join us!

The family of Mildred Eck Ward-Chapman created this Life Tributes page to make it easy to share your memories.