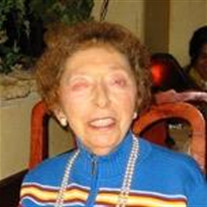 Mildred "Micki" Weintraub, a first-generation American, was born in New York, on March 1, 1919, and passed away in Salt Lake City, on January 29, 2016. She met her husband of 56 years, Herb, at the start of WWII, and moved around the south when he was in the Army. Her first child, Dennis, was born in 1943, and succumbed to leukemia on January 1, 1976. Herb and Micki settled in Los Angeles, after World War II, where they lived until 1998, when they moved to Salt Lake City, to be near their second son, Arden, and his wife, Becky. Herb treated Mickie as though she were a princess. He did the cooking, and the dishes. Lucky woman! Unfortunately, Herb died of lung cancer, in 1999. Micki was a very physically active, intellectually sharp woman, who loved sports, politics, playing Mahjong, and gin rummy (especially with her great-grandson, Logan). Until the last 4-5 years, she walked 3 miles a day, at a brisk pace, climbed 5 flights of stairs, and did isometric exercises. Before her hearing and eyesight diminished so severely, she watched or listened to her beloved Los Angeles Dodgers, and L.A. Lakers. After moving to SLC, she did become a Utah Jazz convert, at least when they were not playing the Lakers. Micki is survived by Arden and Becky, her three grandchildren, Kim Phillips (Chris), Tara Munjekovich, and Dawn Sullivan; and 6 great-grandchildren, Jordan Phillips, Logan Phillips, Ethan Phillips, Maya Phillips, Drew Sullivan and Haley Slagle. The family gives many thanks to Inspiration Hospice, for their excellent and loving care, especially Gloria and Niki. They also appreciate the kind, caring, and professional staff at Alta Ridge Assisted Living in Holladay. All made Micki’s last several months as pleasant and dignified as possible. At Micki’s request, there will be no funeral service. As you know, Micki’s greatest challenge in life was her poor vision, which in later life became blindness. Therefore, in her memory, in lieu of flowers, please consider a donation to support and accelerate new scientific discoveries in macular degeneration, in the form of a check made out to “Moran Eye Center”, noting in the memo portion of the check, "Macular Degeneration Research”, identifying the gift in honor of Mildred Weintraub, and send to: Moran Eye Center Development Office, 65 Mario Capecchi Drive Salt Lake City, UT 84132 The Moran Eye Center’s work includes the role nutrition plays in vision, the genetics of age-related macular degeneration, and less invasive and more effective treatments for macular degeneration.

Mildred "Micki" Weintraub, a first-generation American, was born in New York, on March 1, 1919, and passed away in Salt Lake City, on January 29, 2016. She met her husband of 56 years, Herb, at the start of WWII, and moved around the south when... View Obituary & Service Information

The family of Mildred "Micki" Weintraub created this Life Tributes page to make it easy to share your memories.