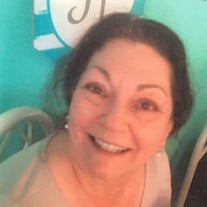 Mona Salazar Czarnik 1953 - 2018 Mona Salazar Czarnik was born in Valejo, California on September 15, 1953. She was 65 when she passed away peacefully to be with our heavenly father on September 25, 2018; she was surrounded by family who all love and will miss her so very much. During the last six months of her life, Mona battled many ailments, fighting each one with as much strength and grace as she could muster. Mona was the oldest of five sisters, growing up in Murray, Utah. On December 21, 1972 she married her sweetheart Robert Czarnik. In 1991 they left their life in the city of Kearns, Utah to live out their dreams raising their kids together on a 40 acre farm in Genola, Utah. Mona would tend to the farm while her Robert was a traveling salesman. She could fix anything and would help anyone who needed it. Mona brought joy to everyone around her; family was everything to her and she was everything to them. We will truly miss her sweet smile and loving hugs. Mona is survived by her husband Robert, daughter Amanda, (Juan), son Stan, and daughter Lindsey. Mona had five grandchildren, Kayla, Isaiah, Carson, Elisabeth, JJ, and great grandson William. She is also survived by her four sisters Kathy, Johanna, Theresa and Jana along with their spouses and families. And several other family members she knew and loved as well. Funeral services will be held 3:00 pm, Saturday, September 29, 2018 at the LDS church on 600 North Main St. in Spanish Fork Utah. Viewing will be held on Saturday from 2-3 pm.

The family of Mona Elaine Salazar Czarnik created this Life Tributes page to make it easy to share your memories.