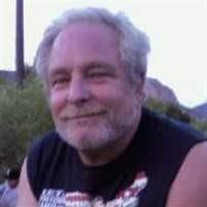 Monte Ray Southwick July 12, 1959 – January 25 2018 Monte Ray Southwick passed away peacefully on January 25, 2018 with his loving wife and daughter at his side. He was born July 12, 1959 in Ogden to Annette Torkelsen and Gary T. Southwick. Monte had a 22-year career with Pineview Water Systems where he worked hard to provide for his family until he retired in 2003 due to health issues. He married Sandra Curtis Southwick on February 1, 1980. Together they had a daughter, Ashley (Southwick) Nguyen, and Monte was stepfather to Sandra’s children Jessica Higgs and Jason Higgs. Monte and Sandra divorced in 1989 but the two remained close as they raised their daughter together. In 1997, Monte found a life-long love with Cheryl Hensley whom he married on July 17th 2002. He became stepfather to her two sons Jason Hill and Eric Hill (Melanie) and the two welcomed many grandchildren into their lives. Monte was affectionately referred to as Moe and was a fun-loving and adventurous spirit. He had a sense of humor that will be missed by all who knew him. He was generous to many and always willing to lend a helping hand. Monte had a deep appreciation for nature and loved camping and fishing in the great outdoors. Monte is preceded in death by his grandparents; father, Gary Teuscher Southwick; and two siblings, Debbie Ann Southwick and Bret J. Southwick. He is survived by his widow, Cheryl Hensley Southwick; his mother, Annette Clawson Torkelsen; daughter, Ashley Southwick Nguyen (Lee); siblings Gary Scot Southwick (Marilyn), Troy J. Southwick (Michele), Michelle Southwick Tracy (Craig), and Teresa Southwick Higley (Martin). Along with stepmother Diane Southwick; stepsisters Heidi Ressler Ames, Trina Ressler Mariani; stepchildren; his grandchildren Tai Van Nguyen, Josephine Lee Nguyen, Cooper Eric Hill, Kayla Alice Hill, Lexci Lynn Hill, Kenedi Marie Hill, along with many beloved nieces and nephews who called him “Uncle Moe”. The family would like to express their deepest gratitude to the staff of Harrison Point Nursing Facility along with Tiffany Buttars with Brighton Hospice Care who treated Moe like family and provided such excellent care in his last days. A viewing will be held on Wednesday January 31st from 11:00 am- 12:30 pm at Premier Funeral Home located at 5335 South 1950 West Roy, UT followed by graveside services at Memorial Gardens of Wasatch at 1718 Combe Rd. South Ogden, UT. In lieu of flowers, the family asks to make a donation in Monte’s name to Autism Speaks, a non-profit organization that benefits children like Monte’s grandson with Autism Spectrum Disorder by visiting www.autismspeaks.org and clicking donate. E-cards from donations can be sent to [email protected]

The family of Monte Ray Southwick created this Life Tributes page to make it easy to share your memories.