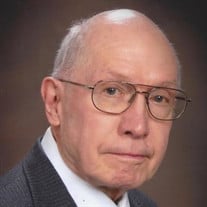 Monty Wardell Megargel 1933 - 2017 Monty Wardell Megargel, beloved husband, father and grandfather, passed into the eternities on April 6, 2017. He was born on October 3, 1933 on a dairy farm in Lake Ariel, Pennsylvania. He was preceded in death by his mother Isabel Laura Palmer and his father Anthony Keith Megargel. He is survived by a sister Phyllis Lee and brother Burton Megargel. From his youth he loved the outdoors and was an avid fisherman and hunter. He served in the Army in France from 1956 to 1957. He graduated from Pen State University in 1958 with a degree in forestry. He obtained a position with the U.S. Forest Service moving to Lewis River, Washington where he worked in timber management on a ranger station. He married Esther Lorraine Strong on June 5, 1965 in Woodland, Washington having met her through a mutual friend (actually a church based organization called the Scientific Marriage Foundation.) They were transferred to Eugene, Oregon and settled for the next thirty years in nearby Springfield. They are the parents of Alan Megargel of Singapore, April Dawn Harbican of Colorado Springs, Colorado and Forrest Glen Megargel of Eagle Mountain, Utah. They have eight grandchildren. Monty and Esther are first generation members of The Church of Jesus Christ of Latter-day Saints having joined the faith on May 1, 1976. They were sealed in the Salt Lake Temple on June 6, 1977 and served a mission in Chicago, IL in 2003 to 2004. As a devoted husband, father and grandfather, Monty will be sorely missed by his family. He served as a temple worker, ward clerk and member of the bishopric. He loved to garden, hunt and fish and take long walks. He taught his children through personal example of righteous living. Funeral services will be 11:00 am, Saturday, April 15, 2017 in the American Fork 38th Ward building, 2433 West 450 South, Pleasant Grove, UT. Friends may call prior to services from 9:30 to 10:30 am. Interment in the American Fork Cemetery.

Monty Wardell Megargel 1933 - 2017 Monty Wardell Megargel, beloved husband, father and grandfather, passed into the eternities on April 6, 2017. He was born on October 3, 1933 on a dairy farm in Lake Ariel, Pennsylvania. He was preceded... View Obituary & Service Information

The family of Monty Wardell Megargel created this Life Tributes page to make it easy to share your memories.