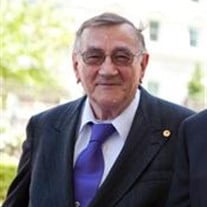 Veteran and beloved husband and father, Morris Fred Raile, of Sandy, Utah passed away Thursday March 28, 2013 of complications from a long-term illness. He was surrounded by his dearest family members and passed peacefully at the University of Utah Medical Center. He was 80 years old. Morris was born May 15, 1932 in Eureka, South Dakota to Fred and Christina Raile. He graduated from Eureka High School in 1950 with honors. Morris married Nimet Turkoglu in Izmir, Turkey on March 12, 1956. Together, they have two loving sons, Rick and John. From his farming roots in South Dakota, he and soul mate Nimet spent countless hours in their garden, taking their bounty to the kitchen to create phenomenal meals together. Morris had a distinguished military career in the U.S. Navy. He served in Korea, with NATO Intelligence in Turkey, and in the U.S. where he was on the forefront of the development of the Fleet Ballistic Missile System (Polaris) stationed at Cape Canaveral, Florida. He retired as a Senior Chief Petty Officer Morris was a proud veteran. He wore his “Retired U.S. Navy” cap nearly everyday. He spoke frequently of his honor in being of service to his country. He felt very fortunate to have served the United States in places all over the world. Much of his life and career was dedicated to keeping the United States and Americans safe. Following his retirement from the Navy, Morris followed his passion for aeronautics. Initially, he went directly to work in developing and maintaining the Federal Aviation Administration’s flight navigation systems. Later, he accepted an invitation to instruct at the FAA Academy in Oklahoma City, Oklahoma. Here, too, Morris distinguished himself. He won many distinguished service awards in his FAA career. Most notably, in 1979 he was a leader of the team which received an award for the Most Outstanding Airway Facility Sector of the Year for work related to the Salt Lake City International Airport. Morris believed in service to the community. He served as Cub Scout and Boy Scout Master in Brevard County, Florida. He was an active member of Toastmasters International and loved public speaking. Morris is remembered by family and friends as a great American who dearly loved God, country and his family. Morris was preceded in death by his sisters Ida Hirsch and Ellen Hirsch. He is survived by his wife Nimet, sons Rick (Martha) and John, grand children Racine (Tony Warner) and Nicholas and the light of his life, his great grandson Charlie. Funeral services will be held on Thursday, April 4, 2013 at the Camp Williams Veterans Cemetery & Memorial Park, 17111 South Camp Williams Road, Bluffdale, Utah 84065, telephone 801-254-9036 (at the facility chapel and grounds). The viewing is from 12:00 pm to 1:00 pm. Services are from 1:00 pm to 2:00 pm. The burial service is to follow.

Veteran and beloved husband and father, Morris Fred Raile, of Sandy, Utah passed away Thursday March 28, 2013 of complications from a long-term illness. He was surrounded by his dearest family members and passed peacefully at the University... View Obituary & Service Information

The family of Morris Fred Raile created this Life Tributes page to make it easy to share your memories.

Veteran and beloved husband and father, Morris Fred Raile, of...