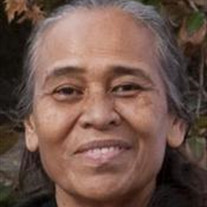 A Long Awaited Reunion Mosiana Ngatu Alusa 1945 - 2013 Our beloved mother, grandmother, sister and friend, returned to her Heavenly Father on July 3, 2013. Mosiana Ngatu Alusa, 68, passed away peacefully in Kearns, Utah. Mosiana was born March 17, 1945 in the beautiful island of Tonga to Semisi and Akesa Nau and was the second oldest of nine siblings. She married Pita Luni Alusa in June 1965. In 1969, as a young couple with 2 children and one on the way, Mosiana and her husband served a full-time mission in Tonga. They enjoyed 20 years of marriage at the time of Pita’s passing on October 13, 1985. Mosiana selflessly and diligently worked hard to support her children. She was employed by Beehive Clothing for 30 years. Through her faithfulness, eight of her children were able to serve full time missions. She loved doing temple work and had a kind and forgiving heart. Mosiana was humble, loving and giving. She was a great example of faith to many people, young and old. She opened her heart and her home to friends and family who needed a safe haven, in which she provided whole-heartedly. Through her actions, she was a constant example and steadfast in her faith. More than anything, Mosiana loved her grandchildren and spent all of her free time caring for them. Mosiana is preceded in death by her loving husband, Pita, her oldest son, Nafe, her granddaughter Arihanna, and grandson Ili’Ili. Mosiana is survived by her children, Alisi (Sasopiami) Pututau, Ana (Sione) Tauataina, Patiola (Mateo) Feletoa, Pita (Suliana) Alusa, Paul (Julie) Alusa, Makelesi Alusa, Mele (Ili’Ili) Esera, Liufau (Kate) Alusa, Lesieli Alusa, twenty-four grandkids, her brothers: Filipe, Hosea and Ofa, and her sister, Mele. Viewing and family services will be held at the LDS Chapel located on 4300 W. 4700 S. in Kearns at 9 a.m. on Monday, July 8, 2013. Funeral services will be held at 12 p.m. Interment will be in the Redwood Memorial Cemetery.

The family of Mosiana Ngatu Alusa created this Life Tributes page to make it easy to share your memories.