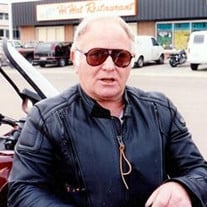 Myron Ralph Creed, husband, father, grandfather, Veteran…found his way home to his Heavenly Father and beloved wife, Loreta, in the early morning hours of January 14th, 2015 due to the complications with liver cancer. He was a strong fighter and put up a valiant battle for many, many years until he could no longer do so. Anyone who knew Myron knew he was a kind-hearted soul who would give you the shirt off his back if he needed to. He had a small bark but was overshadowed by his warmth and generosity. And Myron could talk. If you wanted or even if you didn’t want a long conversation about anything and everything, Myron gave it to you. That is who he was. He will be sorely missed but he is now he has found his way home. Myron is preceded in Heaven by his beloved wife, Loreta, by whom he will be eternally laid to rest next to and his mother and father, Blanche and Ralph Creed. He is survived by his son, Gus Hinds, his daughters, Lory McFarland-Creed and Carol Wood and 8 grandchildren who all love him dearly. Myron proudly served and retired from the United States Air Force and honorably completed a tour in the Vietnam War. He was a great patriot. He loved riding and working on his BMW motorcycles. Myron loved anything BMW and could talk about that for hours on end. Funeral services will be held on Tuesday, January 20th, 2015 at the Roy 2nd Ward of the Church of Jesus Christ of Latter Day Saints on 5127 South 2400 West in Roy. The viewing will be from 11am until 1pm with a gravesite service immediately following at the Roy City Cemetary on 5200 South 2300 West. In lieu of flowers, to defray the costs of funeral expenses, the family is humbly requesting any contributions to be donated to an account set up at any Goldwest Credit Union in the name of Myron Creed or online at GoFundMe. www.gofundme.com/k63bfw We all love you very much Myron, Gpa, Dad…go be with Mom.

Myron Ralph Creed, husband, father, grandfather, Veteran&#8230;found his way home to his Heavenly Father and beloved wife, Loreta, in the early morning hours of January 14th, 2015 due to the complications with liver cancer. He was a strong fighter... View Obituary & Service Information

The family of Myron Ralph Creed created this Life Tributes page to make it easy to share your memories.