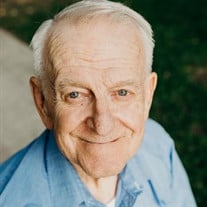 Cedar Hills, UT ~ Myron Locher Hassard 85 , passed away on November 9, 2018 at his home surrounded by his loving family. From the heavens beyond, we can hear Myron’s gleeful cheers to all of us now: “Howdy Doody,” and “Top of the morning to you”. He was born March 25, 1933 in Salt Lake City, UT to Chester Erwin and Margaret Locher Hassard. Myron is best known by his family and friends as “Haz”. He was raised in the Sugar House area and graduated from South High School. Haz later earned his undergraduate degrees in Speech and German from Utah State University. It was here that he met Helen Sherryl Swain. After a wonderful romance, they were married in the Salt Lake Temple on March 19, 1962. Haz later received his Masters of Germanics from University of Washington while temporarily residing in Seattle with his family. For the majority of his working life, he taught German and English to high school students. Haz lived a life of unassuming adventure. He served in the United States Navy as an Aviation Electronic Technician from 1952 to 1956 and was stationed at Norman, OK, Millington, TN, Atsugi Naval Base (Japan), and Naval Base San Diego, CA. He then served a 2 ½ year mission for the Church of Jesus Christ of Latter-day Saints (LDS Church) in the, then, Swiss/Austria Mission. Upon returning, and during his studies at Utah State University, he led a group of 10 students to Germany for The Experiment of International Living. Haz was a seasonal Protective Park Ranger every summer in Yellowstone National Park from 1966 to 1976. He served a full-time mission with his wife in Boston, MA. In addition, he served two other missions with his wife as Employment Specialists for the LDS Church. He enjoyed being a world traveler, vacationing frequently throughout the United States including Alaska and Hawaii. He made several month-long excursions to Europe as well. When he wasn’t flying to one destination or driving to another, he was off on a cruise. His passions included gardening, photography, vacationing, hiking, and enjoying nature and the mountains. Myron is survived by five children: Sherlyn (Chris) Tambasco, Jason (Mialah) Hassard, Mindy Hassard, Rebekah (Alex) Pepenella, Rachel (Ben) Shepherd, 16 grandchildren, and 8 great-grandchildren. He was preceded in death by his parents, his wife—Helen Sherryl Swain Hassard, and his brother—Larry Hassard. Funeral services will be held Saturday, November 17, 2018 at 11:00 a.m., in the Cedar Hills Chapel at 4425 West Cedar Hills Drive, Cedar Hills, UT. A viewing will be held for family and friends prior to the funeral services from 9:00 a.m. to 10:30 a.m. The family wishes to thank the members of the Cedar Hills 3rd Ward, Premier Funeral Services, and all those who loved and cared for our dad. We extend our gratitude to CNS Hospice with a special thanks to Monica, RN and Kristy, CNA. You were incredible! Graveside services and burial will be held on November 17, 2018 at 12:30 p.m. at the American Fork Cemetery, 26 W. 600 N. Share condolences to the family at: www.premierfuneral.com And to all of Myron’s family and friends: “Watch out for the Boogie Man!”

The family of Myron Locher Hassard created this Life Tributes page to make it easy to share your memories.