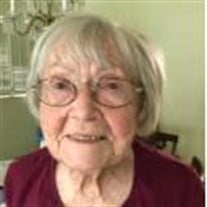 Orem, UT – Nada Cardon Stevenson, known locally as “The Hat Lady”, passed away peacefully on the morning of July 12, 2021 at the home of her daughter Tami Stevenson. Nada was 101 years old, having been born on March 28, 1920 to Isabelle Roundy and Hyrum Michael Cardon. Nada grew up on a family farm located in Benson, near Logan, UT, her family eventually included three brothers and three sisters. She attended the little red school house in Benson, with one class room for first through third grades and a second room for fourth through sixth grades. On the farm, Nada learned the value of hard work; but also learned she had no desire to live and work on a farm. Nada attended high school in Richmond, UT where she was nominated to be school Vice President, an unusual honor for a young woman in those days. During WWII Nada worked for a variety of agencies supporting the war effort. Nada married Samuel Grant Stevenson on September 3, 1946; they moved to Lava Hot Springs, ID where Grant worked for Utah Power and Light Company. With their growing family, they later moved to Dragerton, UT eventually settling in Orem, UT. Nada lived in Orem until she moved into her daughter, Tami’s home in Oakley, UT in 2019. Nada never shied away from hard work, her work career included Utah Power and Light, State Education Commission for Mental Health, Adult Education Teacher for Provo School District and Director of the Neighborhood Youth Corp. Her favorite job though was working at Liquidation Team, where she worked until aged 99. The LT family adopted Nada and they became a second family to her. Nada served many callings in the Church of Jesus Christ of Latter-day Saints. She had a great love for our Father in Heaven and was grateful for her heritage and what they went through for the love of the gospel. Nada is survived by four daughters: Faye Howard, Sunny Pouquette, Julie Dobson and Tami Stevenson, 12 grandchildren and 25 great grandchildren. Nada was proceeded in death by her husband Samuel Grant Stevenson (1981), beloved daughters Diane Ihler (2015) and Janet Allred (2003), cherished grandsons Randy Warner (1994) and Alex Shirley (2010) and all of her siblings. A special thanks to Canyon Hospice, Nurse Brittany, CNA Crissy and Linda, who brought joy and compassion to Nada’s last days. A Celebration of Life will be held at Suncrest 10th Ward located at 90 North 600 West in Orem, UT on July 22, 2021 between the hours of 6:00 pm and 8:00 pm.

The family of Nada Cardon Stevenson created this Life Tributes page to make it easy to share your memories.