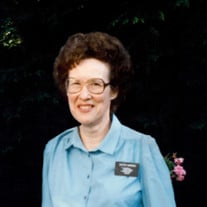 Nancianne Carolyn Harding, 82, passed away January 12, 2020 in Provo, Utah. Harding was born December 27, 1937 in Cleveland, Ohio to Charles Harding Jr and Madge Stafford. She married John McCray on May 31,1955 in Arlington, Virginia. They had two children, Paul Bruce and Charles Harding IV, before they divorced in 1965. In addition to her two sons, Harding is survived by two sisters, Rosemary Hadden and Judee Brown, six grandchildren, Charles Harding V (Ora), Jenae Nielson (David), Thames Harding, Chris Harding, Luke McCray (Julianie), and Jayson Harding; five great grandchildren, Callan and Dezmond McCray and Tristan, Scarlett, and Liliana Nielson, and many beloved nieces and nephews. Harding has lived in Orem, Utah since 1980. She rose to the challenges of raising two sons as a single mother; she was devoted to them. She had many talents and enjoyed sewing, crafts, and working on family history and genealogy. As a younger woman she enjoyed camping and visiting the outdoors as well as taking family road trips with her son's family. She was an active member of the Church of Jesus Christ of Latter-Day Saints, and she held many positions in the various wards and branches she served in. She also served in the Washington Seattle LDS mission. She greatly enjoyed her work at the Granite mountain record vault where she worked with microfilm records for the LDS church. She loved listening to the Mormon Tabernacle Choir music. She adored her grandchildren and great-grandchildren; they were her life. She was a dear friend to all who knew her and was loved by all. She was an avid animal lover who had show cats that won many awards and ribbons. Later in life she had many sweet dogs. In lieu of flowers the family would ask that you make a donation to your local animal shelter in her memory. Funeral services will be held: Friday Januaury 17, 2020 At the Church of Jesus Christ of Latter-day Saints located at: 730 E 400 S, Orem, UT 84097 At 11:00 A.M. -- "In the end, we were all just humans, drunk on the idea of love, only love could heal our brokenness." - F. Scott Fitzgerald

Nancianne Carolyn Harding, 82, passed away January 12, 2020 in Provo, Utah. Harding was born December 27, 1937 in Cleveland, Ohio to Charles Harding Jr and Madge Stafford. She married John McCray on May 31,1955 in Arlington, Virginia. They had... View Obituary & Service Information

The family of Nancianne Carolyn Harding created this Life Tributes page to make it easy to share your memories.