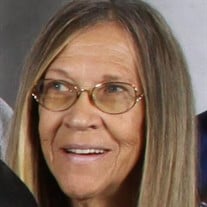 Nancy Colleen Reed 1947 ~ 2020 Nancy was born on July 26, 1947 to Lee Dale Bailey and Sarah Colleen Bailey in Mt. Pleasant Utah. Her parents lived in Ephraim until they moved to Salt Lake City Utah. She married her first husband David Christensen Sr. and had Patti, David Jr. and Kelly. Things did not go as planned and they divorced. She then met Monty Reed Sr. and had Monty Jr. After her second divorce, she finally met the love of her life Sidney M. Mack who became her lifelong companion.. They did their best to raise the 4 children Patti, David, Kelly and Monty and work on their relationship as well. While they were together, they enjoyed bowling, golfing, dancing but mostly gambling in Wendover and with family at home. She always had an open heart for her kids who all moved back in at one time or another some more than once. She also had a giant heart for neighbors and could usually be seen helping with what little she could, It is no wonder many called her mom. She enjoyed a good family gathering and always brought her famous spaghetti salad which will be sorely missed. She enjoyed shopping so much usually only Patti and Jordan had the patience to take her as she needed to go to every store, comparing prices and going down every isle to find all the deals. She had some of the best natural nails that grew so long all the girls were jealous. Mom liked her treats and towards the end would eat an apple fritter or piece of carrot cake before she would touch her dinner. Careful when asking if you could have some of her treats that lay everywhere as one time she ate her whole birthday cake by herself and would not even share with her grandchildren when they asked. Other than her treats, she usually put other people’s needs before her own especially near the end. After Sid passed, the last six years of her life was devoted to helping care for Deborah, Patti and then her father. Nancy returned to her father in heaven on Sunday the 19th of January, 2020. She was preceded in death by her mother and father, the love of her life Sid Mack, her daughter Patti and a couple grandchildren. Nancy is survived by her children David (Faulyn) Christensen, Kelly (Sherry) Christensen, and Monty (Heather) Reed along with many grandchildren, great grandchildren, brothers, sister, cousins, nieces, nephews, etc. There will be a celebration of life service for her held on February 1st, 2020 at 11am. It will be held in the cultural hall of the Church of Jesus Christ of Latter Day Saints building at 895 West 4800 South Taylorsville Utah 84123.

The family of Nancy Colleen Reed created this Life Tributes page to make it easy to share your memories.