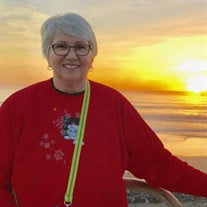 Nancy June Stegeman (Windham) was born on March 26, 1947 in Nogalas, Arizona and died on December 5, 2018 in Murrieta, California. She is the daughter of Adola Marcell Huber and Ray Albert Windham, although she was raised by and sealed to Walter Lee Mallonee. Nancy Junebug (her favorite nickname) grew up in Compton and Long Beach, California. Before graduating from Dominguez High School in 1965, she was passionate about surfing (often referred to as Gidget by her best friends), riding around in her baby-blue Ford T-bird, listening to oldies (especially Elvis Presley and the Beach Boys), singing, playing the guitar, and her first true love, Bub. She had many jobs throughout her life, such as Frosty Freeze, Douglas Aircraft, 7-Eleven, care taking/Nanny, Volt, working as a seamstress, among others; however, she was most devoted to draperies and started her own business, Alpine Draperies, during the 80s. Higher education was vital to Nancy, which is why she studied theater and computer science at Utah Valley University and Cypress College and successfully encouraged her children to obtain advanced degrees. Throughout her life, Nancy remained fond of her adolescent hobbies, but also grew to adore frogs, anything associated with sewing, collecting knickknacks, the beach, writing screenplays, songs, and poems, remaining close with relatives, scrapbooking, cooking, and enjoying Mexican and Chinese food. Of all of Nancy’s most positive and endearing qualities, she had one of the biggest hearts to ever grace the face of this planet. Her children, siblings, family members, close friends, and even the individuals and children she cared for, filled her heart with unrelenting happiness. She had five children with John Stephens, Dave Pontious, and Jim Gordon. Her greatest joy was spending time with her children and grandchildren. As loving as Nancy was, nothing could compare to her devotion to Heavenly Father and The Church of Jesus Christ of Latter-day Saints. Each of her numerous callings in the church were driven by her unwavering faith and testimony, and because of her laudable example, each of her sons served missions and her daughters have regularly served in the church, making her eternally proud. She is survived by her devoted and considerate husband Todd Stegeman, sisters and brother: Jeanne Hifo, Dennis Mallonee, Silvia Stout, and Ruby Nielsen, children: Tammy Burbank, Julia Lewis, David Pontious, Phillip Pontious, and Nathan Gordon, nineteen grandchildren and three great grandchildren, as well as many nieces and nephews. Her death was proceeded by her mother Adola, father Walter, and brother Melvin Ray Windham, and her dearest aunt La Rue Huber and best childhood friend and cousin Charles Barry Wilkinson (Barry). The funeral service honoring Nancy's remarkable life will be held on Saturday, December 15, 2018 at 98 E Canyon Crest Rd, Alpine, UT 84004, in the Alpine Stake Center of The Church of Jesus Christ of Latter-day Saints. Her viewing will take place at 9:30 AM, followed by the services at 11 AM. Interment to follow at Alpine City Cemetery, 400 Grove Drive, Alpine, Utah 84004

Nancy June Stegeman (Windham) was born on March 26, 1947 in Nogalas, Arizona and died on December 5, 2018 in Murrieta, California. She is the daughter of Adola Marcell Huber and Ray Albert Windham, although she was raised by and sealed to Walter... View Obituary & Service Information

The family of Nancy June Stegeman created this Life Tributes page to make it easy to share your memories.