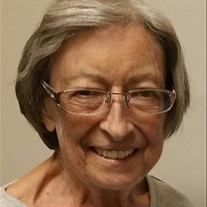 Nancy arrived on July 17th, 1947, in Ogden, Utah to Ivan C. and Ardeth R. Ericksen. We often joked that she was delivered by flying saucer, due to a rash of UFO sightings reported during the summer of ’47. Nancy grew up in and around Kaysville, Utah, while attending Kaysville Elementary and Junior High, and graduating from Davis High School. As the eldest, she was responsible for her five younger siblings, makings sure they were fed and kept out of mischief (a full-time job by itself!). At the age of 20, Nancy met and married a young Airman, Stephen F. Valenski, who was stationed at Hill AFB. They had one son, Dean. The three of them moved to Atlanta, Georgia to be closer to Steve’s family. After a year away, they both decided they were homesick for the mountains and the quieter pace of Utah. At the young age of 26, Nancy became a widow when Steve was killed in an automobile accident. As a single mother she worked hard to provide and keep a home for herself and her son. Among the many jobs she held, she was one of a very few (at that time) female reserve police officers on the Ogden City Police force. Eventually, Nancy took a job in the Office of Civilian Personnel at Hill Air Force Base, where she made many lifelong friends and held many positions of increasing responsibilities. She retired after nearly 40 years of hard work and dedication to her career. Mom was a fiercely independent woman who had a hard time accepting help from anyone. She was stubborn, and often “crabby”, but also a devoted and loving mother, sister, daughter, and friend who would do anything for anyone. She had a very keen sense of humor and a little bit of a mischievous streak. Autumn was her favorite time of year and often remarked that the changing light made her “squirrelly”. She truly enjoyed Halloween and Christmas. Mom was an avid reader in her younger years – Ray Bradbury and Dean Koontz were among her favorite authors. She loved to paint and draw, and craft and create all sorts of odd and quirky things. She loved nature, especially the mountains and the coastline of Oregon. Nancy is survived by her son, Dean, her sister Sandra, brothers Clarence, Edward and Lynn, and her sister of the heart, Jolynn. Also left behind are her two “grand-doggers”, Bug and Zipper. She was preceded in death by her husband, Steve, her mother and father, and her younger brother, Roderick. The family would like to give sincere and deep thanks to her Cardiologist of 14 years, Dr. Greg Almony for his devoted and tireless care. Mom was a true fan! We’d also like to express our appreciation and gratitude to the nursing staff of the ER, ICU, and IMU at Ogden Regional Hospital – you guys are absolutely wonderful! And lastly, to the nurses and doctors at the CVICU at the U of U Hospital – thank you for making Mom as comfortable as possible during her stay with you. Your caring and compassion was a tremendous gift to all of us! In accordance with Nancy’s wishes, there will be no funeral. She will be cremated and a memorial service will be scheduled at a later date. So begins her new adventure!

Nancy arrived on July 17th, 1947, in Ogden, Utah to Ivan C. and Ardeth R. Ericksen. We often joked that she was delivered by flying saucer, due to a rash of UFO sightings reported during the summer of &#8217;47. Nancy grew up in and around... View Obituary & Service Information

The family of Nancy L Valenski created this Life Tributes page to make it easy to share your memories.