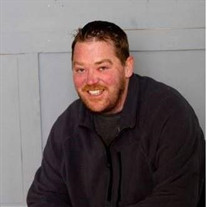 Nathan “Nate” David Bangerter 1977 - 2017 Nate Bangerter passed away in his Salt Lake City apartment from natural causes on January 6th one week following his 39th birthday. Nate is the second of five children born to Brad and Laura Bangerter. He is the brother to Jarom Bangerter and his wife Nicole of Heber Utah, Kristi Meilstrup and her husband Andrew of Orem Utah, Jennie Larsen and her husband Shane of Katy Texas, and Amy Smith and her husband Cody of Lehi Utah. He is survived by all his siblings and his parents as well as his grandpa Mike Bostwick and his wife Pam of Springville Utah. He was preceded in death by his brother-in-law, David Meilstrup and by his grandparents, Keith and Myrna Bangerter and Ann Bostwick. Nate loved his family and knew they loved him. He has 21 nieces and nephews – Logan, Luke, Bridger and Conner Bangerter; Siena, Ben, Claire and Andy Meilstrup; Tyler, Robby, Annie, Luke and Emma Pincock; Cayden, Christian, Evan, Autumn, and Brielle Larsen; and Ella, Andalyn and Duncan Smith. He loved to see these sweet children at any family gathering. Nate was a fun and loving person. In his youth, he was a talented gymnast, athlete, musician and did well in school. He was energetic, adventurous, and likable. Later in life, he suffered some severely disabling mental illnesses. Through his illness, those who were close to him came to realize he had a kind heart and a gentle spirit in spite of his mental challenges and limitations. He lived a humble life and was filled with much generosity to others. He walked a different path and had a difficult journey in his later years but he carried these challenges the best he could. He was a good man. His life has touched many people and his passing has been difficult for us but we believe he is finally at peace being released from the struggles and suffering he faced. We are grateful for the time we had with him in this life even though it seems like it was too short. May your spirit be embraced in the arms of the Lord and your sweet relatives who have passed before you. We love you Nate! Funeral services will be Friday, January 13, 2017 at the LDS Traverse Mountain building at 272 S Traverse Point Drive, Draper, UT. The services will begin at 10:00. Family will be available to greet visitors 30 minutes prior to the funeral. Interment will be at approximately 11:30 at Elysian Garden Cemetery, 1075 E 4580 S, Millcreek, UT 84117. In lieu of flowers, consider the option of donating to a mental health organization of your choice such as NAMI Utah at: http://namiut.org/take-action/donate-to-nami-utah.

The family of Nathan "Nate" David Bangerter created this Life Tributes page to make it easy to share your memories.