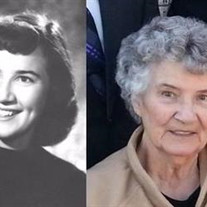 Nedra was born December 12, 1932 to Alfred Newell Knight and Isabelle Cook. She was born and raised in Burley, Idaho where she was the youngest of 8 children. After graduating from high school she attended Brigham Young University where she earned her Bachelor’s degree in Education. While attending BYU, she began dating her brother’s friend Joyce Taylor Gooch. They were married in the Idaho Falls LDS Temple on August 29, 1955. While Nedra and Joyce lived in Utah, they had 2 daughters,who were followed by 2 sons born in Idaho. The family moved to Hemet, California where they added 3 more sons. Her children were the greatest joys of her life, at least until her grandchildren came along and competed for that role. Joyce passed away on August 25, 1991. Nedra was a homemaker for a number of years before she began working as a school teacher. Most of her teaching years were spent teaching 2nd grade at Little Lake Elementary School in Hemet. She has been an active member of the Church of Jesus Christ of Latter-day Saints all her life. She was also a very talented musician. She loved reading, playing the piano, doing puzzles, and cuddling babies. She is preceded in death by her parents and husband, 2 sisters, 5 brothers and a daughter-in-law. Survived by her children Tammy (Pat) Brose, Debbie Gooch, Randy Gooch, Kevin (Sheri) Gooch, Robert Gooch, Brad (Jodi) Gooch, and Chris (Laura) Gooch. She is the proud grandmother of 13 grandchildren and 1 great granddaughter. Funeral services will be held at 11:00 am on Wednesday, July 15th, 2015 at the Springville 9th Ward Meetinghouse at 878 West Center Street, Springville, Utah. With a viewing prior to services Wednesday from 9:45 to 10:45 am. Burial will be in the Riverside National Cemetery in Riverside, California.

Nedra was born December 12, 1932 to Alfred Newell Knight and Isabelle Cook. She was born and raised in Burley, Idaho where she was the youngest of 8 children. After graduating from high school she attended Brigham Young University where she... View Obituary & Service Information

The family of Nedra Mae Knight Gooch created this Life Tributes page to make it easy to share your memories.