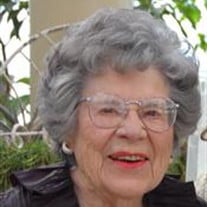 Nelda Moon Shumway quietly passed away at her home April 19, 2011, at the age of 86. She was born in Mesa, Arizona, April 19, 1925, to Harold K. and Marie Magnusson Moon. When she was four, her mother passed away and her father married Ellen DeWitt, who lovingly took over the job of rearing two small girls. She had two sisters Elaine (Tom) Gruwell and Maxine (Carl) Rowley; and two brothers; Kay (Mayva) and Chad (LuDean). She married Richard Phil Shumway on May 27, 1943, in the Mesa, Arizona LDS Temple. After Phil’s service in the Air Force during World War II, they moved to Provo to continue his education. She found great joy and fulfillment in being a wife and mother. She loved her children, supported her husband, and found much happiness in her associations with friends and dedicated service to her church. Music was a happy part of her life: she instilled a love of music in her children, taught 40 years of piano students, participated in many ward and stake musical productions, and was a member of the musical group The Four Forties. She was a member of Entre Nous for over 50 years. She had a deep testimony of the gospel of Jesus Christ and gave a lifetime of loving service. Along with her husband, she served four missions to Merida Mexico, Guatemala, Switzerland, and as hosts at the Joseph Smith Building on Temple Square. They are the parents of 6 children: Linda, Hallie Crockett (Lynn), Richard Jennings (Carolyn); Scott Kay (Anne), Matthew Phil (Rebecca), and James Grant (Jill) and her adopted son Curtis Begay. She has 25 grandchildren and 38 great grandchildren. She was preceded in death by her sister Elaine; son Curtis Begay; husband Phil; son Rick; and son-in-law Lynn. Funeral Services will be held 11:00 am, Saturday, April 23, 2011 at the Sunset Heights Stake Center (1260 South 400 West) in Orem, Utah. Viewings will be held at the Stake Center Friday from 6-8:00 p.m. and Saturday from 9-10:15 am prior to the services. Interment in the Orem City Cemetery.

Nelda Moon Shumway quietly passed away at her home April 19, 2011, at the age of 86. She was born in Mesa, Arizona, April 19, 1925, to Harold K. and Marie Magnusson Moon. When she was four, her mother passed away and her father married Ellen... View Obituary & Service Information

The family of Nelda Moon Shumway created this Life Tributes page to make it easy to share your memories.

Nelda Moon Shumway quietly passed away at her home April 19,...