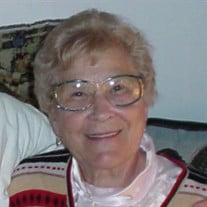 Nevenka Leonidova Kiriakov 1926 - 2019 Nevenka Leonidova Kiriakova peacefully passed through the veil on Monday, November 18, surrounded by family. She was born in a two-bedroom house with a dirt floor in Sofia, Bulgaria. Her father Leonid Garvenliev was Macedonian. Her mother Marta Mocanu was from Romania and deeply religious. Her mother’s sacrifice and devotion had a deep impact on Nevenka’s faith. Nevenka loved to sing, dance, write poetry and compose. She performed in plays, musicals, and in her school band. As a teenager, she experienced the bombing of Sofia in 1943 during the second world war. Kiril Peter Kiriakov caught a glimpse of her in a yellow dress, watering roses on her balcony and told the sailor he was walking with, “I’m going to marry that girl”. She was concerned at first about marring a sailor, but he soon put her fears at ease. They were soon married and had three children; Julia, Peter, and Stoyan. Nevenka often said that the best time of her life was when she could “Take her children by the hand”. She loved children and enjoyed being a kindergarten teacher. Nevenka and Kiril were miraculously chosen for a health care assignment in Algeria, and after two years there they forged documents and escaped to France. In France, Nevenka was a seamstress and fashion designer and made hundreds of dresses which eventually included wedding dresses for her daughter and granddaughters. She converted to the Church of Jesus Christ of Latter-day Saints at age 40 in Rennes, France. The missionaries Elder Bendio and Elder Barclay taught her, and she was baptized in the Atlantic Ocean on July 9th, 1966. She and Kiril were sealed in the Salt Lake temple three years later. They arrived in the United States as immigrants on April 1, 1969 and were threatened in letters from the Bulgarian government with life imprisonment and death for escaping if they did not return to Bulgaria. Through the help of President Ernest L. Wilkinson of BYU, Senator Bennett, and American Ambassador to France Sergeant Shriver, Nevenka and Kiril were able to immigrate to the United States. Nevenka and Kiril soon moved to Manassas, Virginia where she worked in Washington, DC. Temple as a temple worker for 35 years. In 1991 Nevenka and Kiril were set apart by Elder Dallin H. Oaks as mission presidents to preside over the newly formed Bulgaria, Sofia mission. After Kiril’s death, Nevenka served missions in Salt Lake where she completed temple work for her family and wrote her life story. Nevenka loved growing her roses, cooking delicious Bulgarian dishes, singing, laughing, watching classic movies, and handing her family pieces of chocolate. She would often tell her family to “Have a fun!”. She had an infectious zest for life, was perpetually optimistic and happy. She leaves a legacy of powerful faith, compassion, hard work, and joy. She had the ability to make anything she touched bloom into something beautiful. Oh, how we will miss our beautiful Mammy Venche! Funeral services will be 11:00 am, Saturday, November 23, 2019 at the Orem Heather Ridge 3rd Ward, 450 East 2000 North, Orem, Utah where a viewing will be from 10:00 to 10:45 am. Interment in the Orem City Cemetery.

The family of Nevenka Leonidova Kiriakov created this Life Tributes page to make it easy to share your memories.