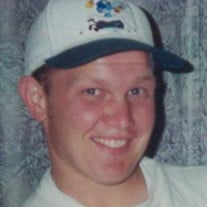 Noel T Broderick returned to his loving Heavenly Father on March 8, 2014 after faithfully enduring his battle with Alzheimer’s disease. Noel was born on August 18, 1973 in Mesa, Arizona. He spent his childhood in Chandler, Arizona and often spoke of his fond memories of the fruit trees at his house. Noel also enjoyed collecting rocks and visiting the Grand Canyon with his family. During his teen years he moved to Las Vegas, Nevada. Noel was an Eagle Scout and graduated from Bonanza High School. Noel served an LDS mission in Independence, Missouri. He developed a love for serving others which continued throughout his life. Noel was happy to help anyone, in any situation and never desired praise or recognition. Noel Married Amy Robinett on April 12, 1996 at the Jordan River Temple in South Jordan, Utah. He loved her more than words can express. His daughter Abby was born in 1999. He was a loving, dedicated daddy and loved his little ‘Pookie Bear’ very much. Noel had a successful career as a hardwood floor installer for Salt Lake Wood. He was very talented and won ‘Best of Show’ for a floor he installed for The Parade of Homes. Noel was handy around the house and in the garage and took great pride in caring for his home. Noel had a great love for life. He was everyone’s friend and had a funny, contagious laugh. He was great with children and always had a niece, nephew, or neighbor kid on his lap. He enjoyed riding dune buggies, fishing, and going up the canyon for a campfire. Noel’s favorite places to travel were Bear Lake and Disneyland. He especially loved going to the movies. Noel was the biggest Utah Jazz fan. His last outing ended up being a Jazz game with Amy and Abby, which is exactly what he would have wanted. Noel was a kind, loving, hard working husband and will be missed greatly by family and friends. Noel is survived by his wife Amy, daughter Abby, parents Sherwin and AnnMarie Broderick, brothers Lee, Rick, and Ryan Broderick, and sister JoAnn Nef in addition to many in-laws, nieces, and nephews who love him very muchFuneral Services will be at 11:00 a.m. on Saturday, March 15, 2014 at the Bluffdale 12th Ward located at 14400 S. Redwood Rd, Bluffdale UT. A viewing will be from 6:00 to 8:00 p.m. on Friday, March 14, 2014 at the church and one hour prior to the Servics. Burial will follow the services at the Riverton City Cemtery located at 13200 South 1500 West, Riverton, UT

Noel T Broderick returned to his loving Heavenly Father on March 8, 2014 after faithfully enduring his battle with Alzheimer&#8217;s disease. Noel was born on August 18, 1973 in Mesa, Arizona. He spent his childhood in Chandler, Arizona and... View Obituary & Service Information

The family of Noel T Broderick created this Life Tributes page to make it easy to share your memories.