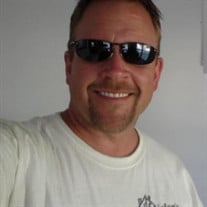 Nolan Jaye Jabczynski October 27, 1971 – September 27, 2020 The funny, mischievous, adventurous, frequently obnoxious and larger-than-life whirlwind that we call Nolan Jabczynski stepped out of our sight on September 27, 2020 and moved on to experience the ultimate adventure. He will be deeply missed, but those of us who know him well expect that he’ll be hanging around playing jokes on everyone. Consider yourself warned! Nolan is the youngest of 4 children born to Jaye and Nene Jabczynski. As a child he was fun-loving and full of mischief; trying to fly in his Superman cape that was really a towel; jumping off the roof onto a mattress he dragged outside when mom wasn’t looking; hanging with the Cains, and just causing all kinds of trouble; he even tangled with a speeding semi-truck when he was 14 and lived to tell about it. Barely. Nolan loves to be in the middle of things and has never met a stranger. If you’ve talked to him for more than ten minutes you probably know more than you ever wanted to about his favorite rock band, Van Halen, and he will vigorously defend the merits of both David Lee Roth and Sammy Hagar. His all-time hero is guitarist Eddie Van Halen, who inspired Nolan to play electric and acoustic guitar for many years. Nolan is also a die-hard Dallas Cowboys fan. He was probably never more obnoxious than when he was arguing about his football team. Nolan met Heidi Bailey when he was 17 and she was 15, and they have been inseparable ever since. They married in 1992 and along came the amazing Tyler; there can be no doubt that he is their greatest accomplishment. Nolan loves spending time with him and will certainly continue to do so. When Tyler was younger and still lived at home, Nolan was often found outside amusing him and all the friends who loved to hang out in Fivespot’s famous garage. For the last few years Nolan and Tyler even worked side-by-side together, Nolan with his successful handyman business and Tyler with his own business as a contractor. They scheduled their projects strategically so they could help each other. Nolan is incredibly proud of his son and celebrates Tyler’s every achievement. Nolan battled addiction for a lot of his adult life. He was able to overcome all but alcoholism, and it ultimately got the best of him. For the last few years of his life it weighed on him heavily and took its toll on his mind, emotions, body, career, and family; essentially all aspects of his life. Knowing that he’s finally free of that heaviness is a great relief to all that love him. Nolan lives on through his son, Tyler Jabczynski; wife and bff of nearly 3 decades, Heidi Jabczynski; father and mother, Dennis “Jaye” and Neola “Nene” Jabczynski; sisters Dawn Cain (Ron Gerrard) and Sonya (Steve) Southworth; brother David Jabczynski; and many nephews and nieces. There will be a Celebration of Life (and Beyond!!) party for Nolan on Saturday, October 3, 2020 from 2-5 pm in the park located at 85 W 1800 N in Sunset, Utah. Although Nolan was a rebel and hated wearing masks and practicing social distancing, we encourage all to do so anyway.

The family of Nolan Jaye Jabczynski created this Life Tributes page to make it easy to share your memories.