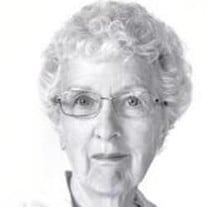 Beloved mother, grandmother, sister, aunt, and friend Nonagene Sevy Wycisk passed away peacefully surrounded by family on Dec. 1, 2014 she was born on August 15, 1933 to Carl Spencer Sevy and Maude Malmquist in Sigurd, Utah. Nona was the 5th of 6 children. She spent her early years in Sigurd and later moved to Salt Lake City where she graduated from South High School in 1951. She attended BYU and graduated in 1958. Nona married David Reece Jones Dec. 20, 1957 in the Salt Lake Temple. He died in 1961. She later married Reinhard Helmut Wycisk on Oct. 1, 1966. He died in 1983. Nona worked in various occupations including teacher, librarian, and sales clerk at Deseret Book. However her greatest joy was found in being a mother and grandmother. A steadfast and valiant member of the Church of Jesus Christ of Latter-Day Saints, Nona accepted and magnified many callings including serving a mission in Roanoke, Virginia in 1990. Her love of the Savior was apparent in the way she lived. She was preceded in death by her parents, daughter Karen, sisters JoAnne and Gerry, and brother Roger. She will be remembered by her children, Heidi Wycisk Anderson, Becky Wycisk Valcarce (Ron), Jennifer Wycisk Smith (Tony), sisters, Ruth Sevy Dragg, and Carla Sevy Rogers, 11 grandchildren, Heather (Dann), Daas, Hillary, Hollie, Christian, Karen, Joshua, Anna, Sophie, Libbie, and Amelia, 3 great-grandchildren, Isabella, Aidann, Eliott, and many nieces and nephews. Funeral services will be held on Wed. Dec.10th at 1:00 p.m. at the Crystal Heights 1st Ward 1970 East Stratford Ave. SLC, UT. Friends and family may call Tues. Dec. 9th from 6:00-8:00 p.m. at the church and prior to the funeral on Wed. from 11:30-12:45. Burial will be at Valley View Memorial Park, 4335 West 4100 South West Valley City, UT.

The family of Nonagene Sevy Wycisk created this Life Tributes page to make it easy to share your memories.