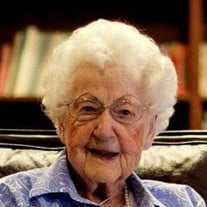 Nora Ford Williamson, loving wife, mother and devoted friend to many, passed away at age 106 on December 3, 2014. Nora radiated a special spirit that drew people young and old to her like a magnet. She was beloved by all who knew her. Nora was born August 25, 1908 in Centerville, Utah to Joseph N. Ford and Algie Walker Ford. She grew up on her father's fruit and dairy farm which she loved. Her mother taught her to be an excellent cook, particularly of cakes and pies. Banana Nut cake and Lemon Pie were everyone’s favorites ! Graduating from Davis High, Nora went on to graduate from BYU in 1930 and taught school at Box Elder High in Brigham City for four years as well as at West High She left Brigham City for Los Angeles to have a new adventure and worked as secretary in a Business owned by Glenn Williamson. She later became his wife and raised three sons in Alhambra and later San Marino, CA Nora lived a life of service in her church and in the community. She served in many capacities including Primary and Relief Society presidents, active board member in DUP and Pink Lady for many years in the Huntington Hospital in Pasadena. She is survived by her children Reid, Gary (Joan), and Dale (JoAnn). 13 grandchildren, 37 great grandchildren and 17 great great grandchildren. She did not renew her driver's license on her 102nd birthday, but was still driving herself then. The family would like to thank A+ Hospice for their kindness and care during this past year. A viewing will be held Sunday, December 7, 2014 from 6:30 to 8:00 pm at the Orem Sharon Stake Center, 545 So. 800 East, Orem, UT. Funeral services will be Friday, December 11, 2014 at 11:00 am at the Huntington Ward, 6249 Kauffman Ave., Temple City, CA with a viewing at 10:00 am prior to services. Interment at the Rose Hills Memorial Park, Whittier, CA

Nora Ford Williamson, loving wife, mother and devoted friend to many, passed away at age 106 on December 3, 2014. Nora radiated a special spirit that drew people young and old to her like a magnet. She was beloved by all who knew her. Nora... View Obituary & Service Information

The family of Nora Ford Williamson created this Life Tributes page to make it easy to share your memories.