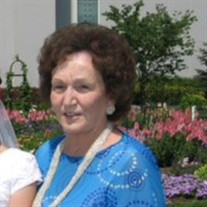 Norma Jean Evans Robertson was born March 23, 1938 in Kellog, ID to Watson George Evans and Lula Huish. Norma was one of six children. She passed away on December 15th, 2021 from cancer surrounded by loved ones. When Norma was a child her family moved to Draggerton (East Carbon), UT where her father worked in a coal mine, until he became trapped onetime and Lula said he could not work in the mines any longer. The family then moved to Spanish Fork for a short time. Then moved onto Provo where Norma attended school and graduated from Provo High School. Norma married Robert Eugene Robertson in August 1954, they lived in many places through out Utah. She served in many different callings in the Church of Jesus Christ of Latter Day Saints. They had four beautiful daughters together and several grandchildren before they split 42 years later. Norma had many hobbies as a child and as an adult. She enjoyed 4H, sewing and entering items into the fair that she won ribbons for those items. Norma liked to play games such as jax, bunco, bowling and cards. She had a love for her companion dogs Taffy and Lucky. As she matured Norma grew a love for making ceramics, gardening, traveling, and beekeeping. Her most favorite things were fishing, hunting, camping, boating, and watching the Utah Jazz Basketball team win. Most of all she loved doing those things with her family. Norma was talented and was successful in many fields of work. She worked at the church cannery for some time, and worked in several different cafes and kitchens. She took a lot of pride in the fact that she worked at the Utah State Developmental Center for nearly 20 years. Norma also worked some time at a turkey plant. After she retired she would go down to Yuma where she continued to make friends. Norma was preceded in death by her parents, her sister Betty Thomas, Brothers Jerry and Tommy Evans, her daughter Robin Robertson, and granddaughter Belinda Sorenson. She is survived by her sister Shirley Homer, and Brother William (Hellen) Evans, Sister-in-laws Loran and Janice Evans, her daughters Pamela (Frank) Covington American Fork, Brenda (Ron McCormick) Sorenson Rocksprings WY, and Clarissa (Ross) Greaves Lehi, 11 grandchildren and many great grandchildren. The family would like to thank Hospice, Home Health and Mountain Point Medical staff for their care and services. Graveside services will take place Monday December 20th, 2021 at the Spanish Fork City Cemetery at 11am. Lunch to follow at 1 pm at Wingers Located in the Provo Towne Centre Mall, 1200 Towne Centre Blvd #1096.

Norma Jean Evans Robertson was born March 23, 1938 in Kellog, ID to Watson George Evans and Lula Huish. Norma was one of six children. She passed away on December 15th, 2021 from cancer surrounded by loved ones. When Norma was a child her... View Obituary & Service Information

The family of Norma Jean Robertson created this Life Tributes page to make it easy to share your memories.