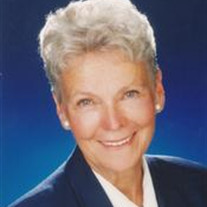 On December 17, 2013 the heroic life of Norma Bryson Workman came to an end. She died peacefully in her sleep at the BelAire Assisted Living Home in American Fork, Utah. She was born in Salt Lake City on April 7, 1930 to Alden Charles Bryson and Audra Florence Turner. She graduated from East High School in 1947 and from Stevens Henager secretarial school in 1969. She was the youngest of three children with sisters, June Lehmberg and Dollores Shelledy. She married Ray Cook Workman in the Logan LDS Temple on August 9, 1948. Her children are John Charles Workman (Kandy), Jim Dean Workman (Gayle), Kathleen Workman Soffe, Bonnie Workman Davis, Christine Workman Thuet (Mark), Jeanne Workman, Byron Ray Workman (Cindy) and Bryson Alden Workman. She had 50 grandchildren and 70 great grand children. She is preceded in death by her parents and sister, June. Her granddaughter Emily wrote, “my grandmother had the most epic and heroic story of any woman I have ever known. You have changed the lives of Workman’s, and their posterity, everywhere and forever”. A true statement! After just less than 20 years of marriage, she was left alone to raise eight young children, ages four to seventeen. But she never wavered. With help from the Church of Jesus Christ of Latter-day Saints, wonderful neighbors, the old West 11th Ward and its Bishops and generous and dear friends from her childhood in the old Park Stake, 1st Ward, she made a wonderful home for her children. Somehow she managed to prepare three square meals a day and those going to school always had a sack lunch waiting for them on the kitchen counter. She was famous in the neighborhood for her granola, cinnamon bread, the most wonderful pies, homemade peach ice cream, and turkey gravy. Receiving only $75 per month in child support payments, she was worse than poor and worked for years cleaning houses for people. In 1969 she attended a 1 year secretarial course at Stevens Henager College where she was voted by her classmates as “most likely to succeed”. For eight years she worked for the Salt Lake School District. In 1977 she moved her family to Orem, Utah to take a job in the recorder’s office of the LDS Provo temple. She was there for nearly 20 years. After retirement she served three LDS missions; a proselyting mission in the NY, NY North mission, two callings to the genealogy library in down town SLC and at least 3 calls as a member locator missionary in St George, Utah. Waking early every morning to read, she became an accomplished and marvelous teacher, and had a deep and well informed understanding of the doctrines of the restored gospel. She loved to read early American history and understood well the blessings of liberty bestowed upon us by God. She loved the Gospel of Jesus Christ and had a firm and unshakable testimony of its truthfulness. She loved genealogy and temple work and desired nothing more than to see all her children and their posterity in the temple. Although she never attained any worldly fame or fortune she will stand shoulder to shoulder with the greatest spirits who have ever lived on this earth. Why? Because she considered her role as mother more important than anything else in her life. In addition to being a devoted mother, she was a true and faithful Latter-day Saint and her children, grandchildren and great grandchildren take this opportunity to rise up and call her blessed. Funeral services will be held Saturday, December 28, 2013 at 11:00 a.m. at the American Fork 14th Ward, 1100 East 4th North, American Fork, UT. Visitations and viewing will be held at the chapel on the day of the funeral from 9:30 a.m. to 10:45 a.m. just prior to services. Interment will be held at Wasatch Lawn Memorial Cemetery located at 3401 South Highland Drive, SLC, UT. Arrangements entrusted to the care of Premier Funeral Services, phone number 801-930-9822. Please visit Mortuary website at www.premierfuneral.com for condolences, complete obituary and funeral listings. Those who desire to send flowers should send them to the American Fork 14th Ward for delivery from 8:30 a.m. to 10:30 a.m. The family would like to offer they’re sincere gratitude for all the cards, letters and emails expressing sympathy and support. We would also like to thank Hospice for Utah for the kind and gently care they gave our mother.

On December 17, 2013 the heroic life of Norma Bryson Workman came to an end. She died peacefully in her sleep at the BelAire Assisted Living Home in American Fork, Utah. She was born in Salt Lake City on April 7, 1930 to Alden Charles Bryson... View Obituary & Service Information

The family of Norma Bryson Workman created this Life Tributes page to make it easy to share your memories.