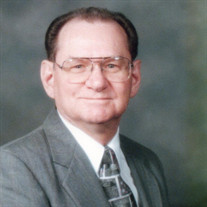 1937 - 2021 Norman Edward Brogdon, a loving and devoted husband, father, grandfather, and friend to all, completed his mortal journey and returned to his heavenly home on August 17, 2021. He was 84 years old. Born on August 9th, 1937, in Las Vegas, Nevada, Norman was the second of four children and the eldest son of Arthur Frank Brogdon and Ruth White Mayhew Brogdon. He spent his early childhood in Las Vegas before his family move to Jerome, Idaho when he was nine. In Jerome, Norman enjoyed helping his father at their service station. He also enjoyed school. He attended Jerome High School and was senior class president. He also enjoyed sports and played on the school’s football team and ran on the track team. Although he did not know it at the time, it was in High School that he met his future wife. When his high school girlfriend told him he was getting too serious, his mother encouraged him to date that “Karren” girl. He followed the advice of this mother, and the rest is family history. On December 21, 1956, Norman married his eternal sweetheart, Carol Rae Karren, in the Salt Lake temple. A few years after their marriage, Norman and Carol moved their young family to California where he earned a bachelor’s degree from the University of California Riverside, in 1969. He spent the next 30 years working for Riverside California as a Probation Officer. After retiring he and Carol move up to Utah to be closer to their kids and grandchildren. Norman loved his family and loved being with them and supporting them any way he could. Norman loved serving others. He would often help motorist stranded on the side of the road and was always helping neighbors and friends in need. He was also a devout member of the Church of Jesus Christ of Latter-day Saints and served in many callings throughout his life: Sunday School president, High Counselor, Bishop, scout leader, teacher, temple worker and missionary. We know he is continuing his service on the other side Norman is preceded in death by his parents and his brother and best friend, Doug Brogdon. He is survived by his wife of 64 years, Carol, and their five children: Norman Edward Brogdon Jr (Georgette), Debra Guyaux (David), Matthew Scott Brogdon (Lynette), Michael Kent Brogdon (Reina) and Timothy Howard Brogdon (Melissa); his sisters Francis Mathews and Elaine Larson, and 21 grandchildren and 32 great grandchildren. A celebration of Norman’s life will be held in a family service on September 11, 2021, at 11 am at the at the Edgemont 4th Ward Chapel, 4056 N Timpview Drive, Provo, Utah. Interment will be at the Eastlawn Memorial Hills cemetery.

1937 - 2021 Norman Edward Brogdon, a loving and devoted husband, father, grandfather, and friend to all, completed his mortal journey and returned to his heavenly home on August 17, 2021. He was 84 years old. Born on August 9th, 1937, in... View Obituary & Service Information

The family of Norman Edward Brogdon created this Life Tributes page to make it easy to share your memories.