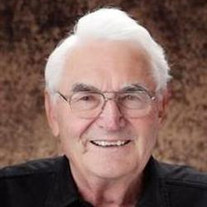 Norman Toone Erekson May 10, 1930 – Dec. 20, 2014 Our loving husband, father and patriarch passed away on December 20 surrounded by his family. Norman was born May 10, 1930 in SLC as the eldest of five sons born to Irene Toone and Zelph Young Erekson. The family moved to Mantua where he spent most of his younger years. He learned many life skills helping his parents run the Maple Creek Trout Farm in Mantua. In 1942 his family moved to Holladay, Utah. He graduated from Granite High in 1948. He served a two-year LDS mission without purse or script to the New England States. This set his faith, which would bless his life and his posterity. He fell in love with and married Annie Paul on July 11, 1952 in the Salt Lake Temple. He graduated from Iowa State University in Veterinary Medicine in 1959. He worked as a vet on the horse race tracks in Chicago for 1 year. He opened the North Cache Veterinary Clinic making Richmond, Utah his home for 26 years. He worked as Assistant State Vet for 11 years. He was a faithful member of the LDS Church with service including 3 more missions with Annie to Australia, Wisconsin, and the Ogden Temple. He was set apart by James E. Faust as a Sealer in 2002. He was able to perform the sealing’s for many of his posterity. He was then called as a Bishop for the second time and served in that position until age 80. He was the National Commander of the Mormon Battalion, pilot, volunteer fireman, outdoorsman and avid genealogist. Norman is survived by his wife Annie (Layton), Rock (Joy) Erekson, Kent (Jana) Erekson, Paula (Gary) Cooper, Leanne (Bruce) Traveller, Denise (Alan) Iverson, Tatha (David) Enz, 5 foster children Lucy, Diana, Lloyd, Valerie, and Christine, 30 grandchildren, 45 great-grandchildren and 2 great-great-grandchildren. Services will be held at the Roy Monte Vista Ward 3845 S. 2000 W. Roy, Utah at 11 am Tuesday, December 30, 2014. Viewings will be Monday, December 29, 2014 from 6-8 pm and Tuesday prior to services from 9:30-10:45 am at the same location. Graveside services will be at 3:00 pm at the Richmond, Utah Cemetery. Online condolences at www.premierfuneral.com

The family of Norman Toone Erekson created this Life Tributes page to make it easy to share your memories.