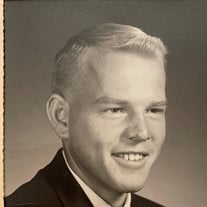 Norman James Henderson Obituary Norman James (Rusty) Henderson, 76, of Saratoga Springs, passed away on March 9th 2021 in Lehi, Utah. A viewing will be held at 12:00pm on Friday, March 12, 2021 followed by funeral services at 1:00pm at the Church of Jesus Christ of Latter-day Saints chapel located at 1998 West 900 North, Lehi, Utah. Burial will follow the service at the Lehi City Cemetery at 385 East Cedar Hollow Road (1450 North), Lehi. Norman was lovingly called Rusty by family and friends due to his once strawberry red hair. Rusty was born in Nampa, Idaho to his beloved parents Paul and Freda Henderson on December 7, 1944. He was the fourth child out of six. He often spoke of his childhood with great tenderness. As a little boy he played in the fields and farms surrounding his family's home in Nampa, Idaho, where he embarked on countless adventures. When Rusty was four years old he would sneak over to the schoolhouse to play on the playground. Often, while the big kids were in class, he would slip into the coat room and help himself to the lunches that he had watched his older siblings Jay, Pat, and Virginia make that morning. Once he’d had eaten all of the best parts of their lunches he would wander home. He did this several times until one day when he was caught by the teacher and sent home to his mother who was “fit to be tied!” (Rusty would always laugh at this part of the story.) He loved and cherished his mother and in her clear blue eyes he could do no wrong. His father Paul drove a truck for Consolidated Freightways. Whenever Rusty’s father would pass by the fields on his way back into town from a long haul he would blast his horn. Upon hearing that horn, Rusty would drop what he was doing, jump on his bike, and head for the cafe in town where his mom was the manager to meet his dad. Together they would sit at the lunch counter sipping cokes and telling stories. Rusty served a mission for the Church of Jesus Christ of Latter-day Saints in the Western Canadian Mission. He took great joy in serving the people living on the Indian Reservations of that area. He had many deeply spiritual experiences there and has always carried a great love and respect for native american people. He married Julie Ann Ontiveros, the most beautiful woman he had ever seen, on June 7, 1968 in the Salt Lake Temple. He graduated from Utah Valley State College with an Associates Degree in Drafting and started working in construction. He worked on several big projects including the Layton Hills Mall, Salt Lake Airport #2, and the East High School remodel. Rusty was very proud of the three truck stops he built along I-80, which were a new concept at the time. This new adventure took Rusty and his family across the midwest and helped to make so many of the memories he and his children cherish today. After a downturn in the construction world Rusty took a job with the United State Post Office in Delta, Utah. This job turned into a career that lasted more than 25 years. He loved the people on his route and was loved by them for his ready smile and sense of humor. He was a veteran of the Vietnam war and served in the Army as an infantry patrol scout dog handler in the 101st Airborne division. He saw combat in the A Shau valley and hill 937. As a scout dog handler it was his job to walk point for the rest of the patrol. For his service he was awarded the Bronze Star. He was a loving and generous father and grandfather. He loved being an uncle to his many nieces and nephews. He encouraged his children to seek education and to never shy away from hard work. Rusty is preceded in death by his parents Paul and Freda, his brother Paul Jay, and his son Preston Henderson. Rusty is survived by his spouse Julie Henderson, his children Kristy (Richard) Pendrey, Steffanie (Matthew) Unwin, Andrew (Michelle) Henderson, his 17 Grandchildren, and his beloved dog Prince Theodore Bearington III. Pallbearers will be his grandsons: James Henderson, Grayson Henderson, Blayze Henderson, David Henderson, Henry Henderson, Caleb Unwin, Benjamin Unwin, and Joseph Unwin.

Norman James Henderson Obituary Norman James (Rusty) Henderson, 76, of Saratoga Springs, passed away on March 9th 2021 in Lehi, Utah. A viewing will be held at 12:00pm on Friday, March 12, 2021 followed by funeral services at 1:00pm at the... View Obituary & Service Information

The family of Norman James Henderson created this Life Tributes page to make it easy to share your memories.