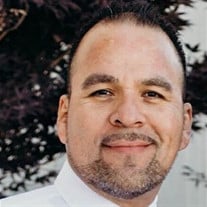 Octavio Alberto Lacayo Gomez May 1973 – February 2018 Octavio Alberto Lacayo Gomez of Orem, Utah was born in Queztaltenango, Guatemala on May 27, 1973, and returned to our loving Heavenly Father on February 24, 2018. He was the second of five children of Hector Alberto Lacayo and Rosa Eugenia Gomez Escobar. Octavio was baptized and became a member of the Church of Jesus Christ of Latter-day Saints at 10 years old. At 14 years old, Octavio arrived in Utah with his family in November of 1987. He earned his High School diploma from Timpview High School. Octavio was blessed with three children, Alberto Emmanuel Lacayo, Karina Krystal Lacayo Gossard, and Miliany Sahori Lacayo. Octavio was extremely proud of his children and loved them deeply. Octavio married his sweetheart, Sally Kate Welch on April 14, 2017. He became a step-father to three sons, Tyler Jacob Eckhardt, Trenten William Eckhardt, and Connor Ethan Eckhardt. Octavio had a passion for life. He was very outgoing, loved to laugh, and make others laugh. He was generous, loyal, and very protective. Octavio had the rare gift of being able to speak his mind both clearly and respectfully. Octavio loved his family deeply, and had a mischievous sense of fun. When he was a child, his older sister Mila would put him on the floor, and tickle him until he would cry. In 1991, Octavio went back to Guatemala to visit Mila. During his visit, he grabbed her, put her on the floor, and tickled her until she cried. He told her, “I am avenged!” From a young age, Octavio loved to build things with his hands, and made all kinds of things out of wood. He was a gifted wood carver, and wood burner. He was fascinated with wolves, figurines, and pictures. As an avid watch collector, he was the proud owner of 65 one-of-a-kind watches. Octavio also loved music with more than 5,000 downloaded songs. Octavio loved the outdoors, and loved road cycling. Octavio was very neat, and organized, and always looked very clean cut, owning more shoes than his wife! Octavio had the ability to fix almost anything. He worked as a roofer for nine years, and a machine operator at USSynthetic for eight years. Octavio was preceded in death by his beloved brother, Mauricio Javier Lacayo, sister Doris Escobar Owens-Jenkins, father Hector Alberto Lacayo, and his grandparents. He is survived by his wife, Sally, his children Alberto, Karina (Orien), and Miliany, step-sons, Tyler, Trenton, and Connor, and his mother Rosa, his step-father Baldomero Ranferi Escobar, and siblings Maria Emilia Lacayo (Carlos), Juan Pablo Lacayo (Elena), Mariela Lacayo, Jacobo Isaac Escobar (Kira), Lourdes Gonzalez, Juan Manuel Gutiérrez, Nancy Lacayo, Fernando Escobar, Astrid Garza (Daniel) and Nancy Escobar Despain (Jeff), and aunts, uncles, nieces, nephews, cousins, and their families. Funeral services will be held on Saturday, March 3, 2018 at 11 am at the Church of Jesus Christ Latter-day Saints, Suncrest 9th Ward building on 140 North 400 West, Orem, Utah. After the funeral services, a graveside service will be held for Octavio at the Highland City Cemetery located at 6200 West 11000 North, Highland, Utah where he will be buried near his brother Mauricio.

The family of Octavio Alberto Lacayo Gomez created this Life Tributes page to make it easy to share your memories.