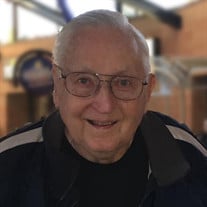 In Loving Memory Oliver Moroni Nickel 1929 - 2022 Oliver Moroni Nickel was born April 25, 1929 in Oakland, CA to German immigrants, Arthur Wilhelm Christian Nickel and Agnes Luise Helena Dinse. At the tender age of nine, he lost his mother and later his father married Charlotte Luzie Anna Hass. Oliver and his younger brother Edwin grew up in Berkeley, CA. He was a member of the Church of Jesus Christ of Latter Day Saints. Not long after graduating from Berkeley High School his family moved to Utah. Oliver served 2 years in the Army, stationed in Ft. Bragg, NC. He met his wife Melda Lane Stancell during this time and they were married in the Salt Lake City Temple May 14, 1954. They enjoyed 62 years of marriage. They raised four children in the Salt Lake City area and were dedicated to supporting them in all their activities and accomplishments. Oliver worked at Safeway, ZCMI, and over 20 years at the Newspaper Agency Corporation before retiring. Some of Oliver’s passions included collecting stamps, coins, vintage cameras and Lionel trains. He enjoyed playing baseball and softball, and rooting for his favorite sports teams – the Runnin’ Utes, SL Bees, Utah Jazz, and especially the Dallas Cowboys. Oliver and Melda enjoyed going to the theater, sporting events, and traveling. He had a lot of great memories from visiting Texas. Oliver loved classic cars and could tell you the year, make, model, and type of engine as they drove down the road. He had a great sense of humor and was quick witted, always making those around him smile or laugh. He made a lasting impression on those who spent time with him. Oliver died of natural causes on January 21, 2022 at the age of 92. He was preceded in death by his loving wife, Melda, son, Neal, parents and brother. He is survived by his children Matthew (Coralee), Michael (Christy), and Tami, daughter-in-law Laura, 13 grandchildren, and many great grandchildren. A graveside service to honor him will be held at Elysian Burial Gardens in Millcreek, UT,1:00 pm, Friday, January 28, 2022 with military honors.

The family of Oliver Moroni Nickel created this Life Tributes page to make it easy to share your memories.