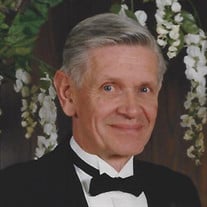 ORVIL GLADE HUNSAKER 18 April 1936 – 21 October 2019 O. Glade Hunsaker peacefully passed through what John Milton called the “Gate of Life” on Monday October 21, 2019, after a long struggle with Parkinson’s disease. Glade was born in Tremonton, Utah, the son of Orvil Elijah and Vera Annie Hansen Hunsaker and was raised in Honeyville on the family farm. Vera died when Glade was only six and Orvil married Ruth Olsen three years later. Glade’s father died when he was 12, leaving Ruth to raise Glade and his three sisters. Glade deeply revered his mother Ruth, her influence in his life, and her legacy of selfless service. Glade graduated from Box Elder High School in 1954 and later from USU in 1960 after serving a mission in Virginia and N.C. for the Church of Jesus Christ of Latter-day Saints. After receiving his commission as a 2nd Lieutenant in the US Army ROTC, a fortuitous one-year delay in his active duty assignment enabled him to begin graduate work at BYU, where he fell in love with Judith Johnson: “the girl just up the street.” They were married September 1, 1960, and honeymooned at Ft. Lewis, WA, for two years. Returning to BYU, Glade completed his MA in British Literature and taught for three years before beginning doctoral work at the University of Illinois. He finished his PhD in 1970 just days before their fifth child was born. They purchased their first and only home in Provo where Glade settled into his career teaching Milton & Shakespeare in the BYU English Department. He was awarded the BYU Continuing Education teacher of the year in 1996. Glade continued what became a distinguished 31-year career in the US Army Reserve, ultimately attaining the rank of Colonel and serving as the Chief of Staff of the 10-state 96th Army Reserve Command (ARCOM). He was a graduate of the Army War College with honors, as well as the recipient of the Legion of Merit honor award and the 96th ARCOM Distinguished Soldier Statue in 1991. While Parkinson’s sapped his strength in recent years, his family will remember him for his humorous, energetic, and fun-loving personality. In 1982 he was awarded the Utah Valley Actor of the year for his unforgettable role as Henry Higgins in “My Fair Lady.” Dad loved the profound statement of John Milton, “Our voluntary service ‘God’ requires” and spent much of his life in service to others. He spent years perfecting his from-scratch German chocolate cake for the birthdays of his many “Loved Ones.” The Bedouin motorboat purchased in ’78 became a symbol of his love for his family, as owning and maintaining a motorboat was not included on his early “bucket list.” He and Judith quickly discovered that the boat created family time par excellence. At Lake Powell Dad will not be remembered as the captain of his boat, but rather as the sentry standing on a protruding rock, anxious to know that everyone was safely docked while his dinner waited for the gang. Glade’s curiosity about life and all things he had yet to learn often dismayed his children as they had to endure yet another delay while he interrogated the museum docent or the road repairman. The gorgeous dinner-plate dahlias he raised exemplified his love for nature’s beauty, and his large family vegetable garden enabled him to teach his children the work ethic he learned as a boy on the family farm. Glade traveled frequently on military assignments and BYU lecture tours and took his family with him whenever he could. Travelling across the US and Europe with a large family on an educator’s budget sometimes necessitated sleeping on rest-area picnic tables or army-base campgrounds, but Dad wouldn’t have it any other way. Life was never dull with OGH. After his BYU retirement in 2002 he and Judith served a mission for the Church of Jesus Christ of Latter-day Saints on the island of Mauritius (Madagascar mission). In 2006 they served a short-term humanitarian mission in Kenya followed by three semesters as volunteer teachers at Southern Virginia University. His strong faith and his testimony of Jesus Christ have never wavered and remain a legacy he leaves for his posterity. Glade is survived by his wife Judith and seven children: Kristen (Will) Christensen, Brent (Stacie), Melanie (Bret) Prescott, Derek (Jennifer), Trevor (Robyn), Devin (Leanna), and Paul (Angela) and his three sisters—Joan, Letty, Betty. Sons Kurtis and Kenneth preceded him in death. Twenty-seven grandchildren and seven great-grandchildren blessed his life. Special thanks to the wonderful Encompass Hospice workers who helped care for Glade this last year--especially Jared, Anne, Ginselvi, and Missy. Services will be held in the Edgemont 6th Ward Building, 4056 Timpview Drive, Provo, on Saturday October 26th at 11am. Viewings will be in the same building Friday evening from 6:30 to 8:00 pm and Saturday from 9:30 to 10:30 am.

The family of Orvil Glade Hunsaker created this Life Tributes page to make it easy to share your memories.