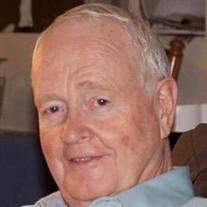 On July 20, 2019, in Glacier, Washington, our father Orville Gene Chugg, 85, left this life to join his eternal companion, Marilyn Stewart Chugg,. He died while doing what he loved to do: traveling and enjoying the beauty of the earth. Orville was born in Pleasant View, Utah, on September 25, 1933, in his home. He was the sixth son for Karl Willis and Mary Ellen Barker Chugg. As noted on his birth certificate, there was no doctor or midwife present at his birth. His father, Karl, died when Orville was sixteen months old. His mother, Mary, later married Charles Walton, who helped raise Orville. Growing up on a farm, Orville learned to work hard. His family had an orchard on the farm in Pleasant View and it was here that Orville met his future wife, Marilyn. The cherries Orville picked would be put into Marilyn’s bucket. The love that blossomed here continued throughout his life and now on into eternity. Attending the local Weber County schools Orville graduated from Weber High School in 1951. On February 11, 1953, Orville and Marilyn were married in the Logan Temple for time and for all eternity. From this union came three children, Susan, Kathryn and Kenneth. We are thankful to have had them for parents and for the love, guidance and care that they gave to each of us. Orville went back to school so he would be better able to provide for his family. He graduated with a degree in Manufacturing Engineering Technology from Weber State College, Cum Laude, in 1968. His other achievements at Weber State included the Weber State Scholastic Society and being elected to the Honor Society of Phi Kappa Phi. His education continued by updating his skills to be the best at what he did. Orville worked as a Manufacturing Engineer, Senior and as a Numerical Control Programmer throughout his career. (Marquardt, Murdock, E Systems, Williams International, Engineering Services, and Parker Hannifin) From 1970-1980 he added a part-time job as an instructor for Weber State, teaching Machine Tool, Tool Building and Numerical Control Programming. The job with Engineering Services took him to Corby, England. Once settled in England, he was called to the branch presidency and he and Marilyn served much like senior couple missionaries. This was a time of great spiritual growth for both he and Marilyn. They made great memories and wonderful friends while in England. Orville was a member of The Church of Jesus Christ of Latter-day Saints. He served in various callings through his life time. He loved the many years he worked with the stake presidency as a stake clerk. He spent many years indexing records for the church. Orville had a strong testimony of Jesus Christ and a desire to do what was right. He was a good example for his family to follow. Orville was a soft spoken man of not many words. When he spoke, people listened to what he had to say. He was meticulous in his work and anything he did. He loved to tease, this was one way he showed his love. He liked to play horseshoes and had a competitive spirit, finding great joy whenever he beat his son and son-in-laws. In his younger years he took his family on camping trips often and many great memories were made. He loved to travel. He and Marilyn went on many trips around the world and to various places closer to home. They loved this time together. Often family and friends would be invited as guests. A favorite destination was Depoe Bay. He loved to watch the ocean, especially when it was real active. Orville is survived by his children Susan (Chris) Westergard, Kathryn (Reid) Haroldsen, and Kenneth (Julie) Chugg, 16 grand children and 46 great- grandchildren (with one on the way). He is survived by his brother Glen Willis Chugg and his half-brother Dennis and half-sister Marian Schwary. He is also survived by sister-in-laws Donna Clements and Beth Vance, Faun (Dennis) Black, brother-in-laws Arza (Marianne) Stewart, Parley Mitton and Gary Farr. He was preceded in death by his wife, Marilyn, only five short months ago, a granddaughter, Erin Westergard, and 2 great-grandsons, Bryant Westergard and Robert Haroldsen. Also his siblings, Karl Cecil Chugg, Elbert LeRoy Chugg, Delbert Moroni Chugg, Melvin Jay Chugg and his sister-in- laws Hildred Chugg and Elna Dawn Chugg. Marilyn’s siblings that have passed on are David Stewart, Gay Mitton, Gwen Farr and Seth Stewart. Brother-in-laws Clarence Clements and LaDell Vance also preceded him in death. Funeral services will be held on Monday August 5, 2019 at 11:00 AM at the North Ogden 7th ward at 205 E Elberta Dr. in North Ogden. The family will meet with friends on Sunday, August 4th from 6:00-8:00 PM and on Monday from 10:00-10:45 AM.

On July 20, 2019, in Glacier, Washington, our father Orville Gene Chugg, 85, left this life to join his eternal companion, Marilyn Stewart Chugg,. He died while doing what he loved to do: traveling and enjoying the beauty of the earth. Orville... View Obituary & Service Information

The family of Orville Gene Chugg created this Life Tributes page to make it easy to share your memories.