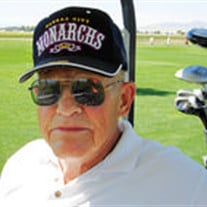 OTTO LEROY GARDNER (Bo) passed away on the morning of Monday, September 24, 2012 in Logan, Utah. He leaves behind his wife of 13 years, Colene Gardner; her four children; Bonny, Angela, Terri and Barbara and her grandchildren; Matthew, Michael, Katlyn, Jacob and Cameron. Otto is survived by his six children; Lauri, Fred, Shawn, Jay, Tony, and Rose; their mother, Joanne; three grandchildren; Du’a, Rhiannon, and Arabella; and his two sisters, Phyllis and Coral. Otto was born to the late Rose Wachselberg and Glenn Gardner in Canon City, Colorado on October 7, 1936. He was a decorated veteran who voluntarily and honorably served in the U.S. Navy as a Combat Engineer for eight years, including two tours in the Vietnam War. He returned to Colorado after his military service where he raised his family. Otto earned a degree in accounting and worked for Coors Porcelain in Golden, Colorado. Later in life, he relocated to Logan, Utah and worked at Bourns Trimpot, receiving many awards and accolades for his innovations in the workplace. Ultimately, Otto “retired” and worked at AutoZone. As a young man, he loved hunting and fishing with his dad and later, with his own boys. An avid sports fan, Otto enjoyed golfing with friends and family, rooting for the Denver Broncos, Colorado Rockies, and Chicago Cubs, kicking back to the PGA, and vicariously climbing the French Alps with the Tour de France. He thoroughly enjoyed shooting guns at the range with his kids and grandkids and playing blackjack in Wendover, NV. A dedicated father, he never missed a ballet recital, a baseball or football game, a LotoJa race, or a military promotion ceremony. He was always the first to lend a helping hand and is most well-known for the infinite amount of automotive assistance he provided to family, friends and neighbors alike. An open house will be held in Otto’s honor and friends may pay their respects to the family on Saturday, September 29, 2012 from 3:00 – 5:00 p.m. at Otto’s residence in Logan, Utah. For address or directions only please call 801-645-9343. Please send condolences to the family at http://www.premierfuneral.com In lieu of flowers, please feel free to make a donation on behalf of Otto to the World Wildlife Fund for African Elephants at: http://worldwildlife.org/species/african-elephant or Bengal Tigers at: http://worldwildlife.org/species/bengal-tiger

OTTO LEROY GARDNER (Bo) passed away on the morning of Monday, September 24, 2012 in Logan, Utah. He leaves behind his wife of 13 years, Colene Gardner; her four children; Bonny, Angela, Terri and Barbara and her grandchildren; Matthew, Michael,... View Obituary & Service Information

The family of Otto Leroy Gardner created this Life Tributes page to make it easy to share your memories.

OTTO LEROY GARDNER (Bo) passed away on the morning of Monday,...