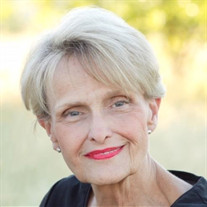 Patricia Diane Reeder Elarth DeYoung 1942 - 2019 Patricia Diane Reeder Elarth DeYoung died Tuesday September 24th after a long courageous battle with Leukemia. She was born February 8th 1942 in Los Angeles County Hospital. She was the only child of Sara Elizabeth Hansen and Jack Milton Reeder. As a young child her parents divorced and both soon remarried. Her mother remarried Norman Elarth who raised and adored her. Her father remarried Blanche Foreman whom she also adored. She spent most of her childhood going back and forth between her home in Los Angeles and her Nana Thelma’s home in Salt Lake City where she enjoyed time with cousins, who where like siblings to her. She was the oldest of the cousins. She grew up in Monrovia, CA and loved being a California native. Building friendships has been an important part of Diane’s life. In second grade she joined the Girl Scouts, and her troop became her life long friends. They continue to meet annually for girl’s trips. She attended Monrovia Arcadia Duarte (M.A.D.) High School and was the Student Body Secretary. She attended Brigham Young University and then transferred to the University of Utah. While attending the Capitol Hill Ward she met Rulon Frederick DeYoung, the two married November 01st 1963. Together they where blessed with three children. Diane was an amazing mother and friend to her children. She had unconditional love for all she came in contact with and instilled that trait in her children. She passed on her love of all animals to her family. She also passed on her strong work ethic and love of service. Family loyalty was key as was family togetherness. Her final words to her children and grandchildren were to always be kind and to love one another. Diane held a variety of positions in the workforce throughout her life. She was proud to be the first ground hostess for TWA, where she assisted weary international travelers. She worked as an elevator hostess at ZCMI Department Store where she became close friends with some of the other elevator girls and they have remained friends for life. She worked as an Assistant Special Needs teacher at Millcreek Elementary School, and Olympus High. For many years Diane worked at ZCMI in the various Juniors and Women’s Departments. Later in life she became a Receptionist at the Law Office’s of Hansen, Epperson and Smith, and Winder and Haslam, and Parson’s, Kinghorn and Harris. She ended her career retiring at the age of 76 from Cohne Kinghorn. Wherever Diane worked, she was adored and appreciated for her organizational skills and her endearing personality. Diane made life long friends everywhere she worked. She was charismatic and made everyone feel loved and appreciated. Diane was a veracious reader and would devour several books each month. Diane had a love of travel and in the last few years she made it a point to visit Hawaii several times a year to see family. She loved spontaneous adventures, whether a drive to Yellowstone, a family trip to Lake Powell on a houseboat, or a visit to Disneyland. She loved a good roller coaster ride, and rode them well into her 70’s with her grandchildren. Diane was an active member of the Church of Jesus Christ of Latter day Saints, where she served in various callings throughout her life. A viewing will be held at the Redbrick Chapel on 3900 South and 2000 East on Friday September 27th, 2019 from 6:00 pm – 8:00 pm, and on Saturday September 28th, from 9:45 am– 10:45 am, with Funeral Services to follow at 11:00 am. Diane is survived by her husband Rulon Frederick DeYoung, her brother Jon Marc Reeder (Jeri), her children Danell Murdock (Steven), Diane Hale (Kelly), David DeYoung (Devon), her beloved eleven grand children, four great grandchildren, many nieces, nephews, and cousins. The family would like to thank the Hematology and Oncology Teams at Huntsman Cancer Institute for their heroic care and love for Diane. Truly a beautiful classic woman of elegance and grace she will be dearly missed.

The family of P. Diane Reeder DeYoung created this Life Tributes page to make it easy to share your memories.