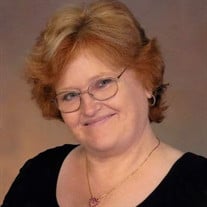 Pamela June Rasmussen Hansen Young, 63, passed away peacefully in her sleep at her home in West Jordan, Utah, on July 29th, 2017. She was born on June 30th, 1954, in Salt Lake City, Utah, to Otto Rasmussen Jr. and LaRee Bleak. A member of the Church of Jesus Christ of Latter-day Saints, she attended Granite High School and, had her love of family-life not pulled her away, she would have graduated in 1972. She raised five children whom she was undeniably proud of and truly loved to the depths of her soul. She wanted to set a good example for them so, as an adult, she went back to school, received her GED, and earned a degree in accounting. They all admired her fortitude and determination to set and reach her goals. She worked for many years in the mortgage and small loan industries before retiring with the love of her life, Mark Allan Young. They married on July 11th, 2009. She loved baking and crafts of all kinds, camping and the outdoors, and spoiling her grandkids. Her greatest dream was to be able to take her whole family to Disney World, which we all gratefully, and without complaint, accepted in an epic vacation that will forever be one of our most cherished memories. She is preceded in death by her husband, Mark Young, her daddy, Otto Rasmussen, her brother, Ronald Otto Rasmussen Sr., nephew, Scott Joseph Rasmussen, and her step-dad, Gordon Allen Mangum. She sincerely missed each of them, along with many other family and friends, who undoubtedly prepared a place in heaven for her and welcomed her into loving and open arms in a joyous heavenly reunion unlike any other. It gives us great comfort to know that she is with them and that all her earthly pain and suffering is gone. She is survived by her mother, LaRee Mangum, five children, Mike (Caprese) Hansen, Kimberly (Scott) Newman, Stephanie (Mike) Summerill, Christopher Hansen, Nicholas (Lanelle) Hansen and one stepdaughter Charissa (Ken) Wynn. She also leaves behind her greatest love, her 18 adoring grandchildren; Rebecca, Cole, Nathan, Charlee, Makayla, Jordan, Ryan, Mackenzie, Savanna, Matthew, Jordan, Hunter, Jazmine, Shielee, Alexa, Kayeshia, Kailer, and Aiden. Also, a sister and brother, Kathleen Watkins and Jeffrey Rasmussen, step brother, Lynn Mangum, two life-long best friends, Annie Sloan and Donna Rackley, the father of her children, Donald Eugene Hansen, along with so many other family and friends who will miss her quick wit and the care and concern she showed for those she knew. Funeral services will be held Monday, August 7th at 11 am at the Park 2nd Ward, 5154 West 7000 South in West Jordan, UT 84081. Friends and family are invited to gather at the same location on Sunday evening from 6 to 8 pm and one hour prior to the services. Interment will be held Monday at 1:00 pm at the Utah Veterans Cemetery & Memorial Park, 17111 South 1700 West in Bluffdale, UT 84065

Pamela June Rasmussen Hansen Young, 63, passed away peacefully in her sleep at her home in West Jordan, Utah, on July 29th, 2017. She was born on June 30th, 1954, in Salt Lake City, Utah, to Otto Rasmussen Jr. and LaRee Bleak. A member of... View Obituary & Service Information

The family of Pamela June Rasmussen Hansen Young created this Life Tributes page to make it easy to share your memories.