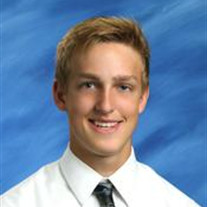 Parker McKay Allred was born September 21, 1996, in Carmichael, CA. At age 16, Parker passed away in the early hours of February 2, 2013, at Primary Children’s Medical Center in Salt Lake City, UT, due to sepsis overload/multiple organ failure, which were complications of the Influenza A virus. He left this life surrounded by his parents, Layne and Kristen Allred; his sisters, Hailey and Madison; and his brother, Sterling. Parker entered this life as an explorer. Initially, that meant toddling off from his parents. Later, it would manifest as insatiable curiosity, the pursuit of high academic achievement, a penchant for trivia, long hikes through canyons, and an appetite for all food. Parker’s childhood was spent in Fair Oaks, CA, where he attended Harry Dewey Fundamental School. Early in life, he developed a strong sense of duty and undeniable love of country. It was no surprise that Parker earned the rank of Eagle Scout at a young age. Parker moved with his family to Provo, UT, when he was twelve. There he attended Rock Canyon Elementary and Centennial Middle School. At Timpview High School, he was a sophomore at the time of his passing. Parker played for the Utah County Water Polo Club and Timpview‘s football and swim teams. Throughout his academic and sports career, he was mentored and led by exemplary teachers and coaches who impacted his life for the better. Parker was the third of four children, and his light-hearted nature was a precious gift to the family. He created solid, loving relationships with each of them. As a respectful son, he was cooperative and receptive to his parents’ counsel. At 6’1” and almost 200 pounds, Parker was the resident “gentle giant” with a tender heart and enthusiastic bear hug. His affectionate nature extended beyond his family as well, where he showed indisputable acceptance of everyone around him. Parker was keenly aware of others’ feelings, circumstances, and abilities, and he tailored his considerate gestures accordingly. He was an instinctive friend to all and a defender of the weak. Parker loved little children. Parker’s strong character was defined by his genuine compassion, his marked intelligence, his resolute integrity, his unwavering loyalty to truth and goodness, his courage to stand for and speak for right, and his simple obedience. With his ready smile came a cheerful and witty personality. Parker’s kind-spirited sense of humor could turn any moment, even those charged with sadness or tension, into one bursting with laughter. Parker was a member of the Church of Jesus Christ of Latter-day Saints and served faithfully in his Priests quorum. The family is grateful for the many teachers he had through the years, in Primary, Sunday School and the Young Men’s program, who helped to lay the foundation for his strong testimony of Jesus Christ. Parker is preceded in death by his grandmother, Shirley K. Hainline (Fair Oaks, CA) and his grandfather, C. McKay Allred (Broomfield, CO). Parker is survived by his parents, Layne and Kristen Hainline Allred (Provo, UT); his siblings, Hailey, Madison, and Sterling; his grandmother, Velma H. Allred (Broomfield, CO); his grandparents, Roger and Shirley W. Hainline (Reno, NV); and many caring aunts, uncles and cousins. The family extends their sincere gratitude to the InstaCare and ER staffs at Utah Valley Regional Medical Center, the Life Flight team, and the PICU doctors and staff at Primary Children’s Medical Center. They deeply appreciate the outpouring of love and support from family and hundreds of friends. A viewing will be held on Friday, February 8, 2013, from 6:00 p.m. - 8:00 pm., as well as Saturday, February 9, from 9:30 a.m. - 10:30 a.m., with the funeral directly following from 11:00 a.m. – 12:00 noon. Both events will be located at the Edgemont South Stake Center, 2950 North Canyon Rd., Provo, UT. For more information please visit www.sweetblueeyedboy.blogspot.com In lieu of flowers, donations may be made to the Parker Allred Memorial Fund at Key Bank.

The family of Parker McKay Allred created this Life Tributes page to make it easy to share your memories.