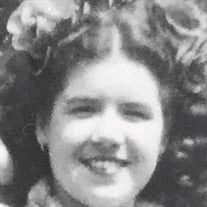 Patricia Phillipina Chicilli Brown July 18, 1926 – November 1, 2018 Patty Brown was born in Des Moines, Iowa, in 1926, to Louis Chicilli and Lucille Hon Chicilli and died peacefully in her sleep Nov. 1, 2018, in Murray, Utah. Growing up, Patty was surrounded by a strong Italian heritage where she had a lifetime of memories, including when she helped wrap boxers’ hands before boxing fights and even became friends with Ronald “Dutch” Reagan, who announced the fights on Des Moines radio. Patty married Navy veteran Leonard Brown in 1946, and they raised their family of seven children in Des Moines and on an Oxford, Iowa farm. From a young age, she had been taught by strict nuns in caring for others, which prepared her to become a nurse. When the family moved to Texarkana, Arkansas, in 1969, Patty continued her education and received her LPN degree in nursing. She worked nights at St. Michael’s Hospital while raising her children. She was active in local politics and was a faithful member of St. Edwards Catholic Church. She loved to crochet (a skill she learned from her grandmother) and made hats for the newborn babies to keep them warm. Her generosity continued throughout her life as she made and gave away crocheted hats to her grandchildren, friends and strangers she met along the way. In 1994, Patty and Leonard moved to Las Vegas to be with their daughter and grandson. Moving to Missouri years later, they made new friends once again. Patty loved to play Bingo and socialize with neighbors. After 61 years of marriage, Leonard passed away in 2007. Eight years later, Patty moved to Olympus Ranch Retirement Center in Murray, Utah, where she met new friends and enjoyed the daily socializing at meals, Bingo, crafts and church. Ever the nurse, Patty watched over her fellow neighbors, making sure they were taken care of. She loved the musical performers who came regularly and would clap and sing along with them. Patty is survived by her brother, Louis Eugene Chicilli, sister, Joan VanZomeren, children Leonard (Cecilia) Brown, Michael (Pat) Brown, Robert (Sharon) Brown, Rebecca Brown, Timothy (Deborah) Brown, Mary Brown, and Jane (Damian) Elsken, 26 grandchildren and 35 great-grandchildren. Memorial service at Olympus Ranch Sat., Nov. 10, 2018, Murray, Utah. To be next to her husband, interment will be at Fort Smith National Cemetery, Fort Smith, Arkansas, at a later date. The family is so grateful to Jessica, Jo, Jennifer and Kevin at A+ Home Care & Hospice, Olympus Ranch staff, and all the thoughtful friends, family and coworkers who have loved and supported her.

The family of Patricia Phillipina Brown created this Life Tributes page to make it easy to share your memories.