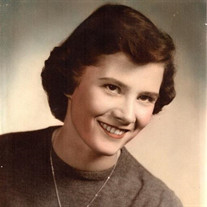 Patricia M. (Griffith) Carpenter It is with great sadness that the family of Patricia (Griffith) Carpenter announces her passing on February 1st, 2019. Patricia will be lovingly remembered by her four children and their spouses, Chery & Leroy Bybee, Spanish Fork, Utah, Kathy Carpenter & Judy Sherwood, Chico, California, Robb & Dawn Carpenter, Anderson, California, Amy Carpenter & Lee Driskoll, Redding, California. She will also be fondly remembered by her 7 grandchildren: Balyn, Shelsea, Rachel, Jon, Hannah, Justin & Cody and 2 great grandchildren Elleigh and Kyzer. Patricia leaves behind her sister & brother in law, Tom & Paula Stevenson of Otsego, Michigan and was preceded in death by her sister Joyce Shattuck of Kalamazoo, Michigan. Patricia was born in Otsego, Michigan on October 14, 1940, the second child of three to Pauline Lynch and Robert Griffith. She attended school in Otsego and Plainwell and after graduating high school, in her early 20’s she left for Redding, Ca to raise her family. During this time, Patricia was very involved in her kid’s school activities, never missing a piano recital or a sporting event. She will be remembered for her awesome birthday cakes, each one unique, her gardening skills, and her wicked sense of humor. Joke telling at the dinner table was always welcomed. Most of all she will be remembered for her unwavering support and love of her children, reminding us to do our best and to always push forward. After raising her kids Patricia went back to school and pursued her passion of nursing, graduating at the top of her class. She continued in this career until retirement where she then moved to Spanish Fork, Utah where she resided until her death. In retirement she continued her love of gardening, playing cards/games and being a devoted mother. Her purpose in life was not merely to survive, but to thrive and to do so with passion. The family is planning a gravesite service at the Hillside Cemetery in Otsego, Michigan sometime in June as weather permits.

The family of Patricia M (Griffith) Carpenter created this Life Tributes page to make it easy to share your memories.

It is with great sadness that...