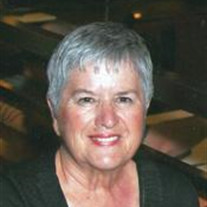 Our beloved Patty, wife, mother, grandmother, great grandmother and sister, passed away August 7, 2013 at her home in Salt Lake City, Utah after a short battle with cancer. Patty was born to Ivy and Ted Pacheco on March 10, 1943 in Salt Lake City, Utah. She married her sweetheart, Sam on November 21, 1959. She is survived by her husband Sam, daughter Rosalee (Hector) Garcia; Siblings: Ted (Marie), Sam (Gladys), Tom, Chuck, Maria (Manuel) Ramirez, and Gilbert; grandchildren: Amber, Ryan (Courtney), Armando (Janell), Freddy (Clarissa) and Sammy (Shari) and 10 great grandchildren. She is preceded in death by brother, Bobby and sister, Linda Chavez. Patty worked at American Express for 14 years as a Policy and Procedures Analyst. She was baptized as one of Jehovah's Witnesses on 6/25/1983 and was a member of the Sugarhouse congregation. She was in the full time ministry for many years. Patty's joy was to be with her family and friends, singing, dancing, cruising and karaoke. She loved working in her garden. But her greatest joy was serving her God Jehovah. She spent many hours helping people learn the bible and showing them the hope for the future under God's kingdom rule. We grieve now because Patty was such a loving and strong force in our lives. She was always ready, willing and able to help anyone and was very generous. She could always make you laugh with her witty sayings. She can never be replaced. If you were to look up the word "strong" in the dictionary you may just find that the definition would read... "Patty Suazo". Ecclesiastes 7:1 says that a NAME is better than good oil, and the day of death than the day of one's being born because you have an entire life to make a good name for yourself and Patty certainly did make a good name for herself. Jesus said, "Do not marvel at this because the hour is coming in which all those in the memorial tombs will hear his voice and come out, those who did good things to a resurrection of life." (John 5:28, 29). We look forward when we will once again see our beautiful Patty. A memorial will be held Saturday, August 10, 3:00 at the Kingdom Hall of Jehovah's Witnesses, 2240 South 600 East Salt Lake City, Utah.

Our beloved Patty, wife, mother, grandmother, great grandmother and sister, passed away August 7, 2013 at her home in Salt Lake City, Utah after a short battle with cancer. Patty was born to Ivy and Ted Pacheco on March 10, 1943 in... View Obituary & Service Information

The family of Patricia Anne Suazo created this Life Tributes page to make it easy to share your memories.