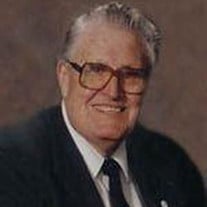 Patrick Daly Dalton, Jr. "Uncle Pat", 84, passed away on December 12, 2006, in Provo, Utah, returning to our Heavenly Father, and to be with his wife, son and others he loved. Patrick was born Oct. 11, 1922 in Salt Lake City, Utah. He married Lela Jesperson on December 20, 1948 in the Mesa Arizona LDS Temple. He was educated at Mesa Union High School, Mesa, Arizona, received his BS from Arizona State University, MS from Utah State University, and a PhD from the University of Arizona. He served 68 years with the Boy Scouts of America, having received his Eagle Scout Award and the Silver Beaver. He served in the US Navy Hospital Corp from 1942-1945. He was a member of the Sons of Utah Pioneers, Murray Chapter. In 1953-1955 served, with his wife Lela, on a Teaching Mission to Liahona High School in the Tongan Islands. Other LDS mission callings, President of the Nuku’alofa Tonga Mission from 1963-66, CES Mission in Suva, Fiji in 1989, President of the Nuku’alofa Tonga Temple from 1990-92, and a fifth mission was served at the Polynesian Cultural Center, Laie, Hawaii 1999-2000. After their first mission to Tonga, they moved to Laie, Hawaii, where he was part of the original faculty of the Church College of Hawaii (later renamed BYU-Hawaii) where he taught biological sciences and other courses. He retired in 1988 as Professor Emeritus. He is survived by children, Tanya (Nolan) Goodwin, Erin C. Dalton, Mark E. (Debbie) Dalton, nine grandchildren, and two great grandchildren, siblings spouses, Benner A. Hall, Werner L. Verhaaren, Alice Dalton, and Tongan daughter Suliana (Bill) Afeaki. He was preceded in death by his wife, Lela Jesperson Dalton, son, Sean D. Dalton, his parents, Patrick Daly Dalton and Ora V. Johnson, two sisters, Mary Ellen Hall, Lynnette Verhaaren, two brothers, Grant R. Dalton, Leonard F. Dalton, and others he loved. A gregarious giant of a man, "Uncle Pat is known for always standing up for what he knew was right, for his generous heart and boldness of spirit; for his life time dedication to his calling as an educator; for his strength of character and genuine love of his fellow man. Funeral services will be 11:00 am, Tuesday, December 19, 2006 at the Apple Valley Ward – Butler Stake Center, 7035 Nutree Drive (3300 East), Salt Lake City, Utah with a viewing at the church Monday from 6 to 8 pm and prior to services on Tuesday from 9:45 to 10:45 am. Interment at the Salt Lake City Cemetery.

Patrick Daly Dalton, Jr. "Uncle Pat", 84, passed away on December 12, 2006, in Provo, Utah, returning to our Heavenly Father, and to be with his wife, son and others he loved. Patrick was born Oct. 11, 1922 in Salt Lake City, Utah. He married... View Obituary & Service Information

The family of Patrick Daly Dalton created this Life Tributes page to make it easy to share your memories.