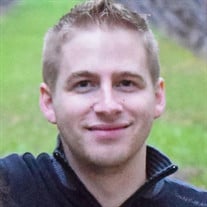 Patrick Clane John Patrick Clane John, age 32, passed away February 05, 2021 from suicide. Patrick was born August 21st, 1988 in Logan, Utah to Darin Clane John and Patricia Rich. Patrick was the third of six children. Patrick’s father describes him as being a good-natured baby, and as a child really enjoyed the scouts and earning all his badges. Although he was quiet, and sometimes overlooked, Patrick’s siblings remember him always being kind, making sure they were fed, and allowing them to always have access to his forbidden food stash so they would not go without. He is remembered for being playful, fun, and had an aura that was remembered as being a warm hug in a cold house. Patrick started working full time while going to high school and contributed all his earnings to the family to help support his siblings. He had a strong work ethic and an ambitious drive to improve his circumstances. He met his wife, Sabina Irlene Michele Holyoak, in 2007 while they were working at the same company. After dating for two years, they were married on May 15, 2009 in Provo, Utah. Over the next ten years four beautiful children were born into their family. Patrick completed two years of college and wanted to become an accountant. Patrick was a devoted husband and father who loved nature, animals, learning about new things, and especially loved to read. He had a unique love for words and language and spoke Spanish quite proficiently. He passed the love of learning down to his children who are all very curious. He always knew how to comfort and calm those around him. Patrick struggled most of his adult life with depression and trauma stemming from experiences in his childhood. Patrick used games to cope with his depression and illnesses and had a large online gaming community that he loved, and they loved him. Patrick worked hard to overcome the effects of his difficult early life. Despite his painful beginnings, he always made sure his children knew that he loved them, and they were valued and important. People who knew Patrick remember him for his intelligence, sense of humor, quick wit, and kindness. He was always ready to be a support to someone in need, whether it be a helping hand or a listening ear. He also, had wisdom far beyond his age, which he imparted with thoughtfulness and compassion. Before he got sick four years ago, Patrick provided well for his family and even started training for a marathon. These last four years have been filled with frustration, countless doctor appointments, and therapy visits to mend his mind and body. Even through the hard times and many obstacles, he was able to maintain his humor and supported his wife as they worked together to build a future for their family. Patrick is survived by, Sabina Holyoak John (Wife), their four children: Shayleigh Kae John (10), Perseus Garet John (7), Audrey Michele John (4), and Westley Clane John (3). Parents: Darin John, Patricia Rich. Brothers: Derek John (Tiffany), Brighton John (Darill). Sisters: Christina John, Elizabeth John, and multiple nieces and nephews. Patrick is preceded in death by his brother Michael Ryan John. Donations to the family can be made by mail to: Sabina John PO Box 263 Provo, Utah 84063 Donations can also be sent online by following the link to their gofundme account: https://www.gofundme.com/f/memorial-for-patrick-john?utm_source=facebook&utm_medium=social&utm_campaign=p_cp%20share-sheet&fbclid=IwAR0RIdTe8jj7t7uIQFRIj6olCGLpyhYRO2AGDUUrbtqijJ8eJEW-ISrftqk

The family of Patrick Clane John created this Life Tributes page to make it easy to share your memories.