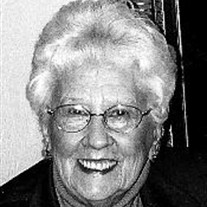 Much-loved mother, grandmother, and great-grandmother, Patsy Ruth Peterson Green began her life in Salt Lake City on May 10, 1924, a daughter of Ruth Middlemiss and Carl Oscar Peterson. Her childhood spent in the Walker Lane area of Holladay gave her a lifelong love of beautiful surroundings. She graduated from Granite High School and later married M. Lamar Green in the Salt Lake LDS Temple on August 17, 1942. With their three children, they later moved to Reno, Nevada, where Pat served tirelessly in her LDS Ward and Stake for many years. Pat and Lamar moved to Napa, California in 1967, where she was preceded in death by her husband in 1975. She then returned to Utah to be closer to her family, which was always her primary concern and interest. Pat was always eager to have large family gatherings and spent many hours with her children and grandchildren celebrating holidays and special occasions. She was a longtime resident of Sandy City, where she was well known for her yard and garden and as a great friend and support to her neighbors. Proud of her professional accomplishments, she was a manager at Beehive Clothing for the LDS Church for many years. Pat was a woman of great faith and conviction, had a strong testimony, was dedicated to her Church and her Ward, and was an example of acceptance and unconditional love to all those around her. Pat was a loving and supportive mother, a tireless and fierce matriarch and protector of her family, and an inspiration and source of wisdom to all who knew her. She was always there when needed, and never missed an important event in the lives of her children, grandchildren, and great-grandchildren. Pat is survived by her sons Fred and Lon, her daughter Diane Jeffers, and their spouses. She was a spectacular grandmother to ten grandchildren and seven great-grandchildren. Funeral services will be held at the Hillcrest 2nd Ward in Sandy at 8735 S. Harvard Park Dr. (1020 E.) on Wednesday, March 9 at 11:00 a.m. Family and friends may visit one and a half hours before the services. Burial will follow at the Holladay Memorial Cemetery, 4900 S. Memory Lane (1990 E.). In lieu of flowers, please make donations to Primary Children’s Medical Center.

The family of Patsy R Green created this Life Tributes page to make it easy to share your memories.